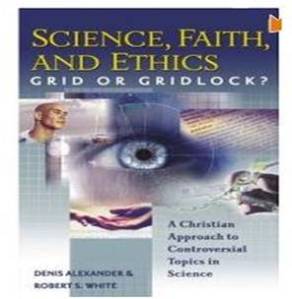 Last month I read Science, Faith, and Ethics: Grid or Gridlock? A Christians Approach to Controversial Topics in Science by Denis Alexander and Robert White (2006). Since it has been a while since I have posted on this topic, the timing is good for a short book review.

Dr. Alexander and Dr. White are British scientists who are also involved with the interaction between religion and science. They skillfully defend how science works, how religion plays an important role in our life, and how they two are not in conflict.

While science makes a difference in what we know about the world, religion makes a difference in how we think about the world. As science makes new advances, we face moral and ethical decisions; such as decisions around nuclear energy, the environment, genetic engineering, DNA therapy, and many more. Therefore, in order for us to make grounded decisions, we should be knowledgeable about both science and religion.

There is no question in my mind that too few people know much about science, religion, and the interplay between these two influential disciplines – thus many are incapable of making an informed decision about something they think they know, but actually don’t.

Science, Faith, and Ethics: Grid or Gridlock? is an easy read, so I highly recommend this book as one of the early books to read in a journey to learn more about the topic – but not the only. After all, the more one learns, the more they will discover how little they know – thus, how much more there is to learn. Here are some resources to get started on the topic.