On Politics
I cannot recall a political graph looking like this one. 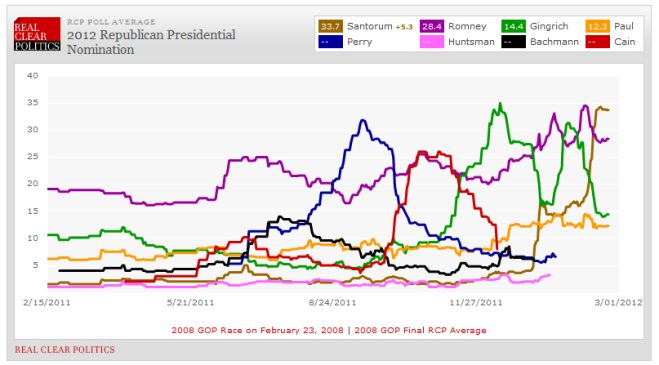 As we hear numerous leading Republicans mention the attack on religious freedoms, is it a Constitutional contradiction for Republicans in numerous state legislatures to introduce anti-Shariah Law legislation?

Interestingly, as Rick Santorum links social issues to economic issues, his handling of past and current comments seems tentative (at best).

Here is last line from this column by conservative columnist George Will: “Neither Romney nor Santorum looks like a formidable candidate for November.”

Dolt of the Year nomination to Rep Bob Morris (R-IN) for attacking Girl Scouts in this letter to congressional colleagues.

Interesting Reads
From Common Ground, a sensible discussion between a conservative and a liberal

Video games in a Urinal (thanks Mags)

On Potpourri
The 50th anniversary of John Glenn’s historical space flight was earlier this week. He is an Ohioan, as is Neil Armstrong. Here’s an short, but well done editorial about John Glenn from USA Today.

Besides being an unnamed Dolt of the Year nominee, do we have a name yet of the decision maker for Qur’an burning on the USAF base in Afghanistan?

During this past week, it was interesting to see pictures and reports of different Carnival celebrations throughout the world.

Woo hoo! It’s official – February 2012 is the most viewed month to date here. Thanks to all who visit this my humble little corner.

FYI: I am posting tomorrow (Saturday).

Many refer to Garrison Keillor as America’s Great Storyteller. Writer’s Almanac, his daily ten-minute show is a gem. To hear an episode, click here or see the link in my sidebar under Potpourri.

To send us into the weekend, watch this rare occurrence of an event at Yosemite National Park, which happened again recently. Have a good weekend everyone, and in the words of Garrison Keillor, Be well, do good work, and keep in touch.