Greetings. Given a mid-week Fourth of July, we turned the days into an extended weekend. The torrid heat held us back as Cincinnati established new daily high records.

How did you keep yourself busy? We attended our neighborhood party on the 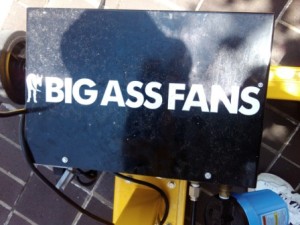 fourth, attended friendship concerts associated with the World Choir Games (watched choirs from China (2), Ohio, Tennessee, and a dance troupe from Belgium). While watching the events, many welcomed the relief from the Big Ass Fans.

We also toured a historic downtown church, went to the Cincinnati Museum Center for the current Omnimax film (To the Arctic), took a group ballroom lesson, and yes – we ballroom danced one evening. The heat kept us away from additional World Choir Games events, a Cincinnati Pops concert, and a military band concert (that was cancelled). Meanwhile, it would have been great to have a 5-foot diameter BAF on our deck or in the backyard.

Being housebound more than we had planned, we also rented a so-so movie, and watched some of our recorded episodes of Chopped and Rick Steves’ Europe. I also bought an interesting bag of black licorice assortments at Costco.

I had planned some choir videos, but given the news of the passing of another entertainment legend, here’s a salute to character actor Ernest Borgnine who recently passed away at age 95. Below are a few videos to enjoy. Meanwhile, have a good week.

A Tribute to Him (done several years ago)