I once wondered about the Word Count on these pages. Unfortunately, that cumulative statistic is not on our dashboard, and given the previous 1,335 posts, I loath going through each individual post to determine the sum. There’s also the question of how many different words I’ve used here, but at I’m confident in the fact that this sentence doesn’t contain any new ones.

The Global Language Monitor (GLM) estimated the number of English language words to be 1,019,729.6. Even though that six-tenths of a words bothers me, there is no need to worry because the entire number is obsolete because the same organization states a new word is create every 98 minutes. Because the GLM issued the figure for January 1, 2012, the current count at the time of this post is 1,030,264, but that number is also obsolete depending on the time you read this gibberish. 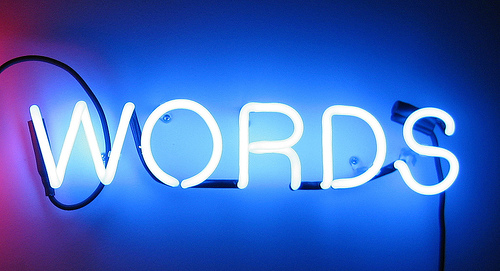 Being that Google seems to want to get their hands into everything, a Google/Harvard Study of Current Number of English Words declares the word count to be 1,022,000. Even though I’m happy with the round number and the lack of a decimal as GLM, I’m not going to quibble about the 0.0121% differential.

To fit my propensity for joviality conviviality on this blog, wordsmiths may want to note that the millionth word was formed on June 10, 2009 at 10:22 GMT. but nobody knows the actual word, which is quite the quandary.

The Oxford English Dictionary (Second Edition) contains 171,476 words in current use with another 47,156 words declared as obsolete. For fans of other dictionaries, Webster’s Third New International Dictionary, Unabridged along with its Addenda Section, has a number that is close enough, although I’m not sure it is exact.

Who knows about compound words, which can be a headache because cleanup and clean-up are two distinct words, but clean up is separate two words that aren’t either of the previous two.

Data is a very common word, but when we use it, wordsmiths debate which of the following is correct: The data is accurate or The data are accurate? But the data-are people are unlikely to embrace datum.

When cooking spaghetti, my wife asks for my judgment. She hands me a piece of spaghetti (which is correct), but spaghetti is plural, so would one string be spaghettum or spaghetto? Actually, the latter is correct – but she may prefer judgement over my judgment. Of course, which of those two is correct depends on the dictionary one prefers.

Whereas the printing industry gives us Scrabble gems as em and en. I don’t know if the official count differentiates color from colour, of if it is American English, British English, or whatever. I certainly am not going to worry about if the number includes informal and/or slang words.

However, I’m confident I didn’t grow-up ever using or even hearing words as internet, googled, RAM, ginormous, bytes, jorts, twerk, and many more.  Of course everyone knows that numnah (which should never be confused with numbnuts) is a felt or sheepskin pad placed between a horse’s back and the saddle to prevent chafing. (Merriam-Webster).

Regional differences add confusion, so I’m not going to worry about whether mangos are found with the fruits or vegetables in the grocery store’s produce department; but I knew what do get when Mom asked for one. I also recall a college incident when I mentioned forgetting my toboggan, and then my friend wondered why I was returning to my room to get a sled to wear.

I don’t know if that number of words includes subject-matter specific words. Who knows how many science words exist, especially the medical words, such as a condition that politicians are suffering from – encephaloproctia. Let the record show that I also don’t stay awake at night wondering which is the proper past tense, shat or shitted.

Those who have read this far may still be wondering about the purpose of this post. Some say this is my feeble attempt to write like Archon, well forget that idea! Others may trace this to Oxford English Dictionary awarding Word of the Year to selfie –  Ah heck, I was taking those long before it was a word.

The bottom line is that this post is about words that I’ve never used on this blog. Heck, there are more than a few first-time words in this post. So, your challenge is to find a never-used word (in English) here and use it in a sentence.

Do you remember this famous use of euonym?