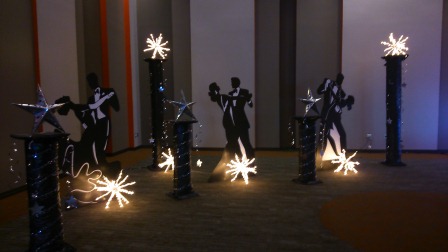 Decorations in the ballroom’s corner

We arrived at the suburban convention center, then followed the red carpet to the upstairs ballroom where we found soft lighting, decorations, and plenty of tables surrounding a large temporary dance floor. At one end and above the floor, on the platform the DJ was checking his equipment from his seat beside the emcee’s podium. The judges’ area was to the left of the platform with forms ready for their completion. The people arriving were nicely dressed … some to compete and others as members of the audience.

The event was a very special sanctioned dance competition with over 30 dancers competing in foxtrot, waltz, rumba, cha cha, salsa, tango, and swing. On this day, the competitors were adults with disabilities – primarily Down Syndrome.

Several weeks ago my wife and I asked the organizer if she needed more volunteers – and she quickly said, “two males to compete” because two contestants needed partners for several dances. I checked our schedule and then accepted … plus my wife volunteered to be on the makeup and hair-styling team …. and the next day I secured a second male.

I only had two short sessions to practice with my partners, but that was enough because the steps were simple and we were not to exceed outside the listed steps. At the competition, organizers placed in heats of 6-7 dancers that allowed plenty of room for both the dancers and the judges on the floor … just like in typical dance competition.

My partners and I competed in four of the seven dances, making the semifinals and finals on three … and even winning third place in one .. but this day was more than that. Yes, it was a competition … yes, there were medals … but everyone one of the dancers were big winners. They loved dressing up, they loved dancing, they encouraged each other, and they appreciated others who smiled, said hello, or shook their hand with a smile … and we support dancers made sure the day was about our partners.

The day was about the contestants, not the dancing pair. The emcee announced each contestant for every dance, but he never mentioned their partner. We were in the program, but after the contestants name. During the awards, contestants received the medals with great joy as the never-mentioned support partner proudly stood by them … and every support partner loved playing second fiddle on a day meant for others.

The story about the organizer and how this group of people came to be is a post in itself, but on this day, my wife and I were very happy that we asked that question several weeks ago about the need for extra help. We smiled a lot on this day and left with a warmer heart, plus I know some tears leaked out of my eyes when the organizer took the time to dance with each contestant.

The next step for me seems logical … that I continue participating as a partner at their weekly gatherings … after all, it’s about them. Through the magic of dance, they see themselves on an elegant ballroom floor … but they probably don’t know or realize what they give to the volunteers.

(Note: It isn’t my place to post a video on the dances, but if the organizer releases them for public viewing, I will share.)