For a family gathering near the end of our trip to Italy this past October, my aunt wanted to take the entire family out to dinner. Well, actually a Sunday afternoon meal. Little did we know what to expect.

We drove about 45 minutes. Once we arrived I told my oldest cousin (in gist) that we passed 342 restaurants along the way, but they were closed – so this was the first one we could find that was open.

With the final part of the road being many twist and turns up a mountain, I knew that those who travel this road on this day must be going to the restaurant. In the image of the map, those familiar with Lucca (region of Tuscany) will see it toward the bottom. The restaurant is marked by the location icon.

The town is Fiano di Pescaglia, a small village with a population of less than 1,000 but a history that goes back to 847. On this day, the action centered on Ristorante da Valentino.

Note: I didn’t take any pictures of the meal, so you will have to rely on my descriptions. However, I want you to think about two important questions: How much did the meal cost (per person)? How long were we there? 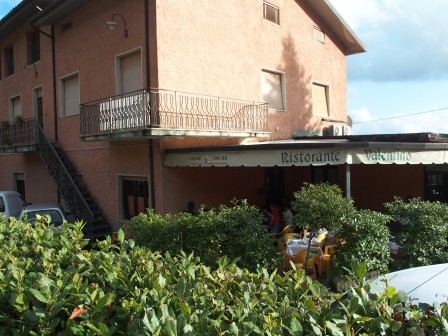 When entering the restaurant, the first thing I noticed was the number of people throughout the numerous sections of this casual place. We entered one of the small rooms that had 3 other groups already seated. There was our table – actually several tables arranged end-to-end with 9 settings and a large bottle of red wine located at each end.

Each of us first received a small plate of appetizers: a slice of lunchmeat (Mortadella), fried polenta, 5-6 olives, and cheese.

Later, the server came by with a large bowl of mushroom risotto, and served a comfortable portion to each of us … returning after a reasonable time with a question: Would you like more? It was good, so both my wife and I accepted the offer.

Next, the server returned with a large bowl of tagliatelli in a wild boar sauce. Oh my, that was outstanding … and I can’t believe my wife ate it as she’s typically not accepting of dietary oddities. Surprisingly, I said no to the “Would you like more” question.

Later, the server returned with rolled lasagna that contained a filling of cheese and spinach with a different red sauce – yes, followed with “Would you like more” on which I passed.

Up next from the server with the big bowl was ravioli with a meat filling and a different red sauce that went into the same bowl that I’ve been using since the risotto. Of course, “Would you like more?” would follow later … I couldn’t pass on a second helping of this delight.

Attendants removed the well-used bowl, so the plate was now ready for the arrival of the next course: a platter of meat for each end of the table – small pieces of chicken, ribs, beef, lamb, and rabbit. The meats were especially tasty.

Before finishing the meat, the server made space at each end of the table for a platter of french fries and a platter with fried mushrooms and fried cauliflower.

Once it was obvious we were finished with this course, a small plate of salad appeared – an odd place as we Americans are used to eating salads early to prepare the way for the meal. But in this case, the salad was readying us for dessert!

The server delivered a platter of of variety of desserts for each end of the table. Pies, tarts, and cakes provided a delightful end to the meal.

Before describing the meal, I asked two questions: How long were we there? How much did it cost?

Sometime during this culinary extravaganza, I walked around the restaurant wondering about the number of people being served – and it was 165-190! Regarding the meal, my wife and I both agree that we were not stuffed until the desserts (we must have suddenly ran out of inner digestive space).

Finishing the 22 Euro ($24) meal 4 hours after starting, then we walked further uphill to the church … and the beautiful view of the valley.

If you ever in this area of northwestern Tuscany near Lucca on a Sunday, I suggest you make a reservation at Ristorante da Valentino, then find your way to Fiano di Pescaglia.