I started tracking out-of-conferences games of BCS conference teams five years ago when the NCAA expanded the regular season to 12 games. The statistics show the following:

The table below displays cumulative statistics, while the graph below illustrates percent games against nonD1 teams yearly by conferences. Note: In 2007, the Big 12 value is the same as the SEC (thus hidden). 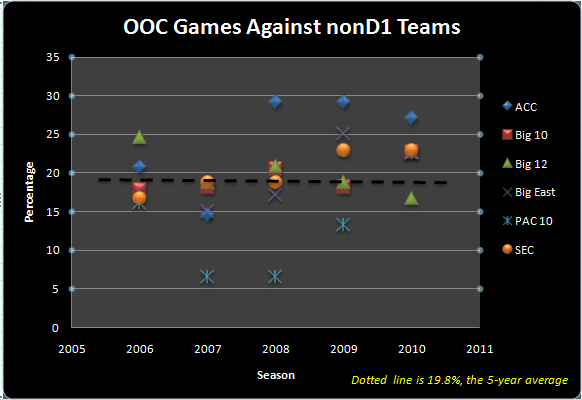 Five years ago the college football regular season expanded to 12 games. Since then, I have monitored the out-of-conference games played by the BCS conference teams.

Some points about the study

Fact 4: Using the 2010 averages (orange) as a baseline, Big 12 clearly has the highest rating of D1 games and the ACC the lowest; the other conferences cluster around the average.

Below are the numbers for yourself. What about the five-year trends? Well, that’s tomorrow’s post. Stay tuned.