Another weekend is history, so who was yours?

My weekend was a full with working during the day Thursday through Sunday, an informal evening of dance without my wife, a formal night dancing at a grand ballroom with my wife, and Quickstep formation practice with her as well. (I’m drafting a post about Quickstep.) The above probably accounted over 90% of my waking hours.

Although I announced Meals: The Musical, I don’t want to start it until I get a full-week of blogging in the books – and hopefully this is the week.

Besides an important reorganization of this blog, I have been able to prepare some posts that are in the queue while creating others that are still rough copy. So, a full week of posts is possible. On the other hand, I’m behind on reading your blogs and with housework.

Celebrations for Your Week

Let’s start the week with a double feature of chuckles. First is a short commercial, but the second is a trip to an amusement park for an animation of the (to be) world tallest coaster scheduled to open in 2017. Enjoy the ride – and have a good week.

The proposed Keystone XL pipeline continues to make the news. Politically, it’s project that one party oversells the jobs impact while the other party overstates the environmental impact.

Very seldom do I read columnist Walter Williams because I find his brand of conservative to be off base. Besides, I demonstrated this January 2011 post his premise as wrong. No, not a disagreement, just flat-out wrong! Nonetheless, the title of his recent series of columns is Liberals Use of Black People for Own Agenda. My response is simple: I didn’t realize that conservatives don’t use any group for their own agenda.

The absence of a notable, high-level US representative at last weekend’s Paris rally was sad. At least the White House admitted they made a mistake.

I’m pleased with the number of Muslims who have spoken out against violence since the Paris tragedy, and I continue to believe that education within the Islamic community is the best vehicle against the Jihadists.

The 2016 ambitions are testing the waters. Yep, Mitt Romney (R-MA) is interested in a third try focusing on poverty, and Mike Huckabee (R-AR) (while on his Guns, God, Grits, and Gravy book tour) slammed President Obama for letting his daughters listen to Beyonce. Let the parade begin, so bring on the clowns (and the party is open to all political parties).

The State of the Union is next week, but I’m not interested in a canned speech with predictable responses for the audience.

When will politicians (actually anyone) learn that most analogies to Adolph Hitler are not a good idea. A Dolt Award to Rep. Randy Weber (R-TX). He apologized, but a bit late.

People don’t believe me when I tell them what my dental specialist (implants) offers patients, so I took this picture after an implant-maintenance visit early this week. 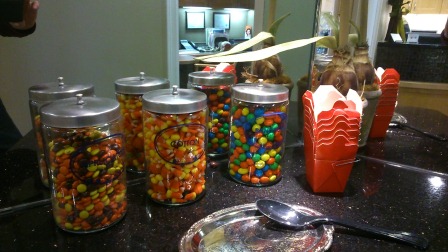 Lauren Hill Update: She made it to Christmas, and then the new year. I saw this local news story Thursday evening, and she continues to impress everyone who knows her story. The foundation she started has raised over $1.2 million in 3 months as she continues to be a spokesperson for children with cancer (The Cure Starts Now Foundation)

Given Saturday’s celebration, I will have a cartoon post for Saturday.

I’m hoping for the next-to-the-last act of Life: The Musical to be next week, which means the theme will be on the next Monday Morning Entertainment.

To lead you into The Onion, here’s a powerful message from Mad magazine’s Editor-in-Chief as viewed on CBS Sunday Morning. (Thanks Mouse for finding this.)

Another 2-fer to send you into the weekend. The first video is for those willing to join Raye in a Friday celebration. Last, but not least, a song from T Rex to get you movin’. Have a safe weekend and in the words of Garrison Keillor, Be well, do good work, and keep in touch.