Hello everyone. I had a feeling I would be going too long. Here’s some background music for you.

In the spirit of Waldo, you may have wondered, “Where’s Frank?” As you know, we love to travel. A planned trip this past July was not only cancelled, the cancellation happened after purchasing out airfares. Good news is that when you book on Southwest Airlines, the money spent on a cancelled flight is returned as a credit with a use-by deadline (about 6 months). Then a great deal came along for a 11-night cruise in the Caribbean – so with the airfare credit, it was a deal not to be passed. 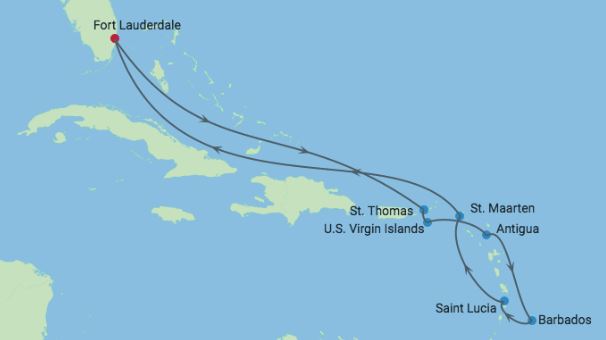 Here’s my quick note on each stop.

Celebrity Equinox is a large ship of 2800+ passengers – but not a mega-ship of 6,000+ passengers. As my normal custom, I didn’t gain weight on this trip. I enjoyed the on-board entertainment of shows and music. Even had a few comp surprises: bottle of wine, champagne, two trays of chocolate covered strawberries, a bowl of fruit, and a wonderful meal in a specialty restaurant. Most were because of an issue, but the wine and one tray of strawberries were from a Guest Relations Rep that I spontaneously got dancing.

A plaque with a saying was above each urinal (on the ship). I enjoyed this one the most: An honest politician is one who, when bought, stays bought. (Simon Cameron, 1799-1889)

In my opinion, it’s always good to have some unplugged time. Aside from having phone access in 2 ports, I was without internet access. The television in the cabin had news channels, so I stayed somewhat informed.

A note to ponder about Congress – The minority complains about the actions/behaviors of the majority, even though the majority is acting/behaving as the minority did when they were the majority.

I’ve made considerable progress on my final series, which will be a retrospective on various topics. However, I still don’t know the dates.

The next concert is set with The Guess Who. Acceptable songs will be from the following artists: The Guess Who, Burton Cummings, Chad Allen, Chad Allen and the Expressions, Brave Belt, and Bachman-Turner Overdrive. (Note: I love BTO, but I hope participants focus on the others listed because those groups and people are the foundation.) Think of the list as a family tree involving The Guess Who’s before and after. Concert date and time is this Saturday 2 November 2019 at 1:00 AM (Eastern US).

Good to see you again!