I earned by undergrad degree at Bowling Green State University, thus a proud Falcon. The end of 2009 marks the end of celebrating two monumental sports moments from years gone by: the 1984 NCAA Hockey Championship and the 1959 NCAA Football Championship.

I imagine someone is scratching their head about the 1959 gridiron feat because references list Jim Brown-led Syracuse as national champions, but the Falcons were the NCAA College Division (Small College) champions. The team numbers are impressive: 9-0-0 and outscoring opponents 274-83 … and to think that rival Toledo scored 21 points while the defense held 6 opponents to single digits. Here are some notes about the personnel.

Here’s a short article about the team. By the way, the players above and below with hyperlinks are enshrined in the BGSU Hall of Fame.

Twenty-five years later (1984) the Falcon icers won the national championship. Although BG had a stellar record (31-7-2) and ranked #2 in the final poll, an OT loss to Michigan State in the league championship game sent BG to Boston to face the Terriers in two-game total-goal series. Having lost by 3 the first night, BG roared back to win by 4.

A rematch semi-final win over MSU then vaulted the Falcons into the finals. Trailing by 3 to Minnesota-Diluth in the final period, the Falcons roared back to tie with 1:47 left, and then eventually winning in the fourth overtime!

Here are some of the roster notables.

See the full roster
Read about the season

During my years on the campus, I was an avid Bowling Green Falcon hockey fan. 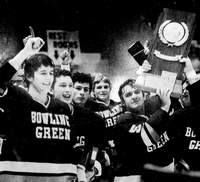 Although I wasn’t a student when the Falcons won the 1984 National Championship on Gino Cavallini’s fourth-overtime goal, my heart was there and tuned into ESPN. I wasn’t there to see two Hobey Baker Award (hockey’s Heisman) winner, George McPhee and Brian Holzinger, but they increased my pride.

Today, the BG Ice Arena faces the threat of becoming nothing more than a physical education facility. While surfing this part Friday I discovered the university is considering disbanding its hockey program. 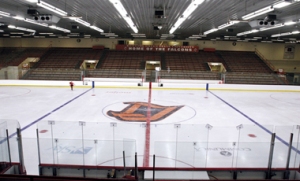 The facility and finances are at the heart of the issue. After years of neglect, the 40 year-old arena is antiquated – in need of both repair and renovation. Updating has been delayed – funding decreased and eventually cut. Surely the facility hasn’t made recruiting easy, thus it’s been a tough last 10 years for Falcon faithful.

Past neglect (by choice) and tough economic times have put the university’s administration between a rock and a hard place. Part of investing in a team is investing in the facilities, and I hope this is not a search-for-financing plea as clearly used by pro franchises.

As avid of a fan I was and as much as I still bleed orange, I say pull the plug. Instead of continuing as a bottom dweller and having one of the worst facilities in the CCHA, I’ll settle for no more embarassment and living in my memories – the kind I’ll get when I return to campus, sit in the seat, and remember when the building shook.

Images from the Associated Press and Bowling Green Sentinel-Tribune

PS: It’s 4:15 pm (same day of the post) and the BGSU Athletic Director posted an open letter today stating all sports are safe for next year – but also emphasizes the budget constraints.