Whether in the United States, Canada, Brazil, Argentina, South Africa, Australia, or most other countries, each country has a story about European immigrants that began their new roots in the new land. 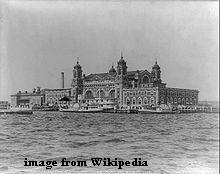 Castle Garden.) After the Federal government took control of that process, Ellis Island became an important gateway to a new life.

From 15-year-old Irish girl Annie Moore on January 2, 1892 until 1924, the Ellis Island Immigration Center processed 12 million immigrants who serve as the foundation for over 100 million Americans today – including me – and all in the shadows of Lady Liberty’s words:

Give me your tired, your poor, your huddled masses yearning to breathe free. The wretched refuse of your teeming shore. Send these, the homeless, tempest-tossed to me, I lift my lamp beside the golden door! 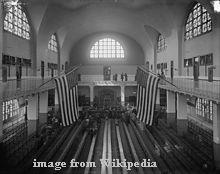 its gates in 1919. While this Island of Hope served as a start for a new life for many, it was also the Island of Tears for the rejected 2% wanting to enter.

Once inside the country, many immigrants formed communities in their new world. For me, I enjoy visiting the ethnic neighborhoods (especially Italian) that remain today. Immigration dispersal is a story in itself as my city of Cincinnati has German and Irish heritage, while the roots in cross-state Cleveland are eastern European and Italian. Besides, I still don’t know the entire story of how a pocket of Italians ended in rural southeastern Ohio where I grew up.

Although Ellis Island served other purposes for its last 30 years (1924-1954), different immigration centers processed immigrants, including my mother in 1953, who (at the time) did not know English. Today, Ellis Island is a national monument serving as a national museum of immigration.

The video below sparked this short reflection on immigration that actually deserves more than I’ve given. Not only does Peter Boyer’s music capture the feeling while celebrating of an important part of American history, the images reminded me of the stories of many that repeated across the country – including in my own family, which sought a dream in America.