The concert stage will be active this weekend as we transition from the King of Pop to The King. Elvis Presley will be in the building to take the stage this Saturday, 1:00 (Eastern US)

Cincinnati is in the midst of an unseasonable blast of summer. I’m ready for the transition into fall – which will happen soon.

The new season of Dancing with the Stars starts on Monday. Although I’m not acquainted with most of the participants, I’ll be watching.

Just saw the movie Blinded By The Light (trailer). Interesting, despite a slow beginning.  I would describe it as sad and inspirational – frustrating and joyful. Thumbs up!

One more week to go in my golf league. I haven’t been happy with my swing the past two years, but hey – I still enjoy the game. Meanwhile, I jumped into fantasy football for the first time in a long, long time. Trying to prove the pundits wrong because I’m currently the underdog every week! Never fear – the Benevolent Impalers won the opener!

So far, I’ve enjoyed going through my blog closet finding unfinished posts. There are more to come!

Wondering: Instead of e pluribus Unum (“one out of many”), has America became a land of prejudices based on political ideology, race, gender, sexuality, and religion/personal belief?

As this post is published, Democratic candidates are participating in a 3-hour debate in Houston. Meanwhile, I’m counting the number of pieces in a large bag of recently shredded paper.

It’s always interesting reading and watching various perspectives of September 11 2001. That day impacted the world. That day brought much of humanity together. Outside of this statement, President Trump and 9-11 should not be used in the same sentence, same paragraph, or the same story.  That day is much more important than him, and anything about him.

To lead you into this week’s satirical headlines, The Onion provides famous instances of censorship in US history.

Dog stool pretty much picked over by the time fly arrives
Distraught man still finding painful reminders of long-gone hoagie around apartment
Fashion designers announce plans to wave with both hands, bow slightly
Longtime Sleepytime Tea addict has to use 6 bags just to feel drowsy
Scholar wishes someone would refer to him as preeminent
Man overcomes fear of public urination

Antarctica’s only native insect
Something about private labels
Painter William Blake
Symbolism and the albatross
New species with a headline fitting for The Onion (at least look)
(Infographic) Your brain on beer vs. coffee
(Photos) Australian Geographic photo contest winners

To send you into the weekend, here’s an unexpected song and artist from the norm. In the words of Garrison Keillor, Be well, do good work, and keep in touch.

The Story
Life: The Musical is an original aFa production is a journey featuring songs of about life. Each act features an aspect of life as a theme with music supplied around that theme. 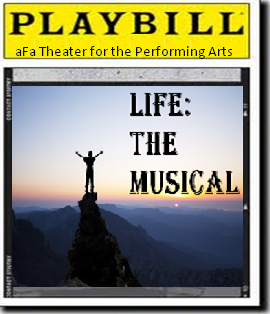 Act 11
Life … the time for the living to live. One’s life starts when one is born. Shortly thereafter, we are given something that stays with us no matter where we go – a name. Immediately, we are nourished, so we grow physically, mentally, and emotionally from babies into young children … and that’s when we start to dream about our future life. Growth never stops, so from children we move on as teens .. but school is still much of life at this point.

Eventually, we move into adulthood as women and men with many things going on in our life. Whether its work, play, or family,  life can be complicated, so many times we hope for the best. Act 11 is about hope, so song titles must include Hope, Hopes, Hoping, Hoped, Hopeless, or Hopelessly.

Production Note
To prevent browsers crashing from loading too many videos, please 1) include the song title and artist in your text, and 2) paste the URL as part of your last line (not a new line). The latter will provide a link, thus not embed the actual video … but I don’t mind unembedding, so apologies are not necessary.

Announcement
Legends have started many acts at aFa Productions, and this one is no different. He’s in the building, so ladies …. no screaming … but give an enthusiastic welcome to Elvis Presley with Cross My Heart and Hope to Die.

*** For a bonus clip after the song above, start watching this one at 3:00 minutes.