It was about 2003 as I was working on a long-term project for an upstart company. A retired friend and I would talk about him coming down to my work area for lunch. Our target was a nearby establishment having a local reputation for good hamburgers.

He came, we went, had a good time, and even discussed the burger. He returned a month later, but we went to a different place for a burger – discussed and compared. Another time, a third place, a third burger, and then ranking the three. Little did we know about the road ahead.

My project ended, but we continued trying different places – especially ones with a positive reputation or recommendations. I’m not sure of the timeline, but a third friend joined us after he unexpectedly lost his job; thus more comparisons, rankings, and notes.

In July 2005 I decided to start a blog to post reviews of our ventures. I hustled to get local readers by commenting at various local blogs and bulletin boards … then a major (and unexpected) break … a high-profile writer at the Cincinnati Enquirer contact me, and he wanted to have lunch with us. With a photographer and his notepad, we met at the place of our choosing.

I was in Abilene, Texas the day the Enquirer published. Emails were flying into our mailbox, but I didn’t respond because the link to the article was malfunctioning. I did my morning presentation in Abilene, and I was anxious during my flight to Cincinnati. I returned home to discover a call from a local radio station whose powerful signal reaches most of the country, let alone a feature article in the paper’s Life section that extended to an inside page, and many comments on the blog. Yep – the next night we were on the radio for about an hour.

Receiving burger recommendations was one of the benefits from the publicity … thus the reviews chronicling of the adventures of Bucky, Freddie, and Wolfie continued. Eventually, we were also featured in the Enquirer’s weekly entertainment paper – CinWeekly. A local food personality also invited us to her radio show. An upstart podcast company also did a 30-minute interview.

Our journey continued for a few more years. Jobs, projects, or health issues caused us to fade away. Nonetheless, a touch of pride still remains for being one of the Cincinnati Burger Guys … so, Happy Hamburger Week. 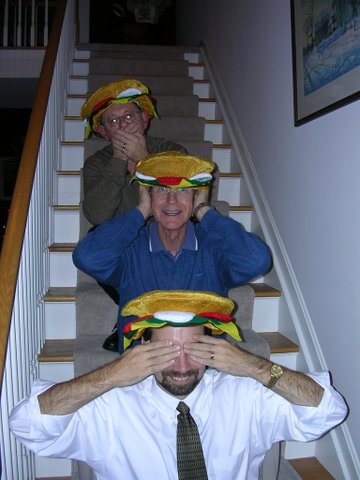 From the top down: Freddie, Bucky, and Wolfie

On Politics
Healthcare.gov, health care rates, cost and availability of health insurance, are related issues – but not the same.

When Congress passed the Affordable Care Act, I saw it as a start, not an end. Republicans tend to under-regulate while Democrats tend to over-regulate. Given the at best, shaky rollout of healthcare.gov and initial implementation of the law, I hoped each party would step forward to make the law better. Because would stretch each party outside of their comfort zone, fat chance of that occurring.

Insurance companies decreasing their list of physicians is not only problematic and pathetic!

First I wondered why a first-term senator would attend Nelson Mandela’s funeral. Then I wondered why said senator would ceremoniously protest Raul Castro by walking out of a ceremony honoring a man of reconciliation. Yes, Senator Ted Cruz (R-TX), that’s you – and staging an action to bring attention to yourself is very unlike Mr. Mandela. I yield my final comment to this great American orator.

A good read about Senator Cruz from the editor of Real Clear Politics.

On Potpourri
I have a holiday party for the weekend, which will start very early in my day. After all, I must open the doors early for those in time zones ahead of mine. Your friends are welcome as well … beware … there will be items with names on them.

For those needing these pertinent holiday tips, The Onion offers these suggestions for decorating a Christmas tree.

Once again, I enjoyed Act 11’s music. Bad News – Time: The Musical will conclude after the first of the year. Good news – A new musical will take its place

Getting Freshly Pressed still brings a smile, but it is work. After all, staying to true form, I respond to all comments and reciprocate many visitors.  Reality is that FP brings a spike in followers and daily hits (temporarily), but maybe a couple of bloggers who may turn into regulars. Juggling FP with holidays, Time: The Musical, these OITS, and preparing for a holiday fest is more than a chore! For those that didn’t know, here’s the post.

Being on the same FP page as Kathy McCullough was an added treat!

Apologies to Bulldog for my careless mistake in Act 11.

Here are your weekend celebrations

Let’s celebrate going into a weekend with a song from 1968 that reached Billboard’s Top 10. The video has wonderful images to go along with Everything that Touches You by The Association. Who remembers them?

Have a safe weekend and in the words of Garrison Keillor, Be well, do good work, and keep in touch.

On a Few Political Shorts
As I posted yesterday, I did not watch the State of the Union. From the reports and snippets that I’ve seen, I’m glad I didn’t. Yesterday’s post gave 10 suggestions to Democrats, of which I expect them to do none of them.

Organization guru Steven Covey had an interesting article in the USA Weekender two weeks ago about how political parties can come together. Good idea – fat chance of it happening. Here’s my post on the widening gap.

Politicians simply make it too easy to demonstrate why moderates independents are unhappy. Let’s look at some comments by Sen. Jim DeMint (R-SC).

On the New Addition to the Links
Since the Anonymous Moderate mentioned A Frank Angle, I have added this site on my sidebar.

On Tiger and Golf
As the PGA tour starts its season, Tiger is currently out of the picture. Golf needs him and he needs golf. Nonetheless, he has to get his life in order, thus golf must wait.

On Wine and Poems
This may seem like a strange pairing, but here’s a site with poems about wine.

On Hamburgers
Hamburgers are an American food treasure. For those who love these savory patties anytime of the year, here’s a good article about it’s history.

To go into the weekend, here’s a fun report from Bill Geist (CBS Sunday Morning) regarding what could be the best burger to be found. Enjoy and have a great and safe weekend!

On Pelosi and Torture
As Nancy Pelosi continues to two-step around what she didn’t know about military torture, I’ll simply say I don’t believe her. Again, I have three questions to Congress: Who knew? When did they know? Why did they remain quiet? ….And the Republicans are correct here.

At least the previous administration is admitting making the decision, so please step down Madam Speaker.

On Continual VP Cheney Comments
Dick Cheney repeatedly talks about how the Bush Administration kept us safe after 9-11. I have one question: 9-11 was on your watch. Besides blaming the Clinton Administration, where was the protection?

On Two Suggestions for Congressional Republicans

On Wanda Sykes
Did the comedian cross the line with her jokes about Rush Limbaugh? Yes. Is the incident worth all the coverage? No … just like Rush. Get a life people!

On Evolution Again
In Vol. 23 (last week) I mentioned the books I’ve been reading about evolution and religion. Then Kathleen Parker provided this timely column.

On Alfred Wallace
I don’t know how many people know about Alfred Wallace. With his studies in SE Asia, he is actually Charles Darwin’s co-discover of natural selection as the mechanism of evolution. Here’s a National Geographic story on the lesser known naturalist.

On Texas
Several weeks ago Governor Rick used the ‘secession’ card. I know Texans our both a proud people and proud of their history. Seems many Republican Texans like that going on their own is a good idea. Hmmm … should we beat Texans to the punch and give them back to Mexico before they leave?

On Tasty Barbeque
Hooray! May is National Barbeque Month. I’ve got to give a shout-out to my favorite barbeque sauce – a white sauce from Big Bob Gibson (Decatur, Alabama). It serves as a great marinade too!

On Burger Grease
Everyone knows that hamburgers can be greasy. After all, burger enthusiasts love juiciness. But burger grease art? Hmmm … watch this short clip.