Last weekend’s Crosby, Still, Nash & Young concert provided over 20 songs. The next concert (tentatively 27th July) will feature the same four – BUT only their solo careers. Tip – Keep the others off the stage!

Although I haven’t decided yet, readers may get two beach walks next week.

A professional baseball player dies away from home. The team honors him at the next home game. The players were his number with his name on the back of the jersey. His mother throws out the first pitch – a perfect strike. The team wins the fame – a shutout – a no-hitter. All the day before his 28th birthday. That’s a difficult script to write.

The news is covering the 50th anniversary of the first moon landing. Here are several articles of interest for those interested.

A forgotten fact about the first landing on the Moon. The year -1969 – right in the midst of a turbulent social period throughout the world. Yet, the world stopped for this event, therefore humanity was united as one – at least for a brief moment.

For those who like this sort of thing, here’s a site focusing on media bias, which I’ve also added to the Resources section on the sidebar.

Many refer to President Trump with a variety of names and adjectives: Bloviator, Narcissist, Idiot, Jackass, Asshole, and many more. Instead of inflaming a supporter, I continue to simply say, “He’s a pathetic person, an even worse leader, and he brings the majority of problems on himself.” By the way – it works!

I’m not a fan of the Congressional group known as The Squad, but at least a few Republicans spoke up condemning President Trump’s language about the four female Democratic representatives. Meanwhile, most of the GOP caucus were silent, evasive, or issued shallow statements.

Given President Trump’s controversial tweets about The Squad, I like this headline at The Onion because it speaks volumes about this supporters – who will still be around after he leaves office: Trump supporters worried racist attacks against progressive Democrats just talk

To lead you into this week’s satirical headlines, The Onion gives us some thoughts about the future of farming.

To send you into the weekend from hot and muggy Cincinnati, here’s a song that I like by an artist that I don’t like – but hey – I like the song! Besides, it fits my heat theme. In the words of Garrison Keillor, Be well, do good work, and keep in touch.

Greetings! I hope this find you in good health and spirits – and thanks for returning after my late-spring/early summer blog break. Yes – I missed my interactions here! After taking some time away from my little corner of the world, I eased back to the blogs by visiting.

Vacationing was the reason for my time away – but I did draft and edit some future posts. After all, some readers anxiously await more beach walks. Also almost ready are a short story, several dance posts, a true story about food lines, and a challenging series about religion in the United States. I hope to unveil a new header with the next Opinions in the Shorts.

Amidst a combination of excitement, unknown, and low expectations, my wife and I embarked on a never-done-before journey – a bus-trip tour vacation.

We flew to Las Vegas a day early, then became part of 33 vacationers from eight different US states and 3 foreign countries for a 15-night tour of US National Parks and Monuments. Yes – Americans from Alabama, Georgia, Massachusetts, North Carolina, Ohio, Pennsylvania, South Carolina, and Texas joined vacationers from Australia (6), New Zealand (4), and South Africa (2) to be led by a guide from Colorado and a bus driver from Arizona.

After a short, evening orientation and social gathering, the group boarded a bus that would log over 2800 miles (4500 km) over 2 weeks at about 7 miles per gallon. Except for one two-night stop, that meant 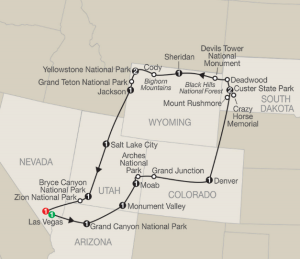 a different hotel every night – yes – essentially living out of a suitcase for 2 weeks.

Given my wife and I had only previously visited Las Vegas, Grand Canyon, and Denver on this itinerary, we were excited to see the national treasures and the land connecting them. We were also apprehensive about a group tour on a bus – let alone the ambitious undertaking of the time and miles involved in our initiation into bus touring.

Four conceptual thoughts are prominent in my mind as I reflect about this trip.

(-) The US National Parks are special places. I combined two quotes by John Muir and Stephen Mather that express my feelings. Everybody needs beauty as well as bread, places to play in and pray in, where Nature may heal and cheer and give strength to body and soul alike – and this can happen through the US National Parks – not only our best idea, but our best ideal.

(-) Whether the vast grassy plains of eastern Wyoming or the desert areas of Arizona, Nevada, and Utah, the USA has a lot of land that remains wide open, Seeing miles and miles of land without a house in sight stimulates a variety of thoughts.

(-) The early history and struggles of the national parks still rings today. Same arguments – different players about federally protected land and land use for business development.

(-) But this point hit my the hardest: How little I know about the American Indians native to the land. Right here, right now I admit it – and I’m ashamed of it and unfortunately believe the same is true for the vast majority of Americans.

Meanwhile, it’s good to be back. Do you have one particular post I need to visit? Here’s a song to start northern hemisphere summer.

The reward for Gov. Scott Walker (R-WS) officially entering the presidential race is this candidate profile from The Onion. I’m losing track, but I think he is the 15th Republican entering the fray. I see more on the horizon!

A recent poll puts Donald Trump (R-NY) leading the GOP race. Funny … but The Bloviator also has the highest disapproval rating of any candidate in both parties. It’s early, and he’ll keep talking. Meanwhile, he fooled me by filing his election paperwork.

Predictably, numerous Congressional Republicans were quick to criticize President Obama on the recent Iranian nuclear deal. Cheers to the few on both sides of the aisle who prefer to read and study the agreement before commenting.

The question isn’t whether or not Iran will get the bomb, but can the global community convince them of not using it.

Baseball’s All-Star Game came to Cincinnati this past week, and it was a rousing success for the city and its baseball fans. From a Reds player winning the Home Run Derby to having 4 Reds legends being on the field, there were many memorable moments.

Some have called for GM to withdraw their sponsorship of Kid Rock’s tour because his use of a Confederate flag. To me, some people just don’t know when to stop … but Kid Rock needs to seriously think about it. Then again, it is his right to do as he pleases.

Interesting that some continue to disagree with ESPN awarding Caitlyn Jenner the Courage Award over Lauren Hill. Let the record show that Lauren’s parents wanted to meet Jenner to say that they were not involved with the wave of criticism.

The WordPress gnomes again changed my settings that blocked emails of your new posts. Fortunately, I think the block was less than a week. Damn gnomes.

With only two acts remaining, Meals: The Musical returns next week. Act 9 features Snacks and Leftovers. In this case, leftovers stand for items that haven’t had been in any previous act – such as seafoods, eggs, and more. Acceptable snacks would be candy, chocolate, cookies, potato chips, pretzels, pizza, and more. For both snacks and leftovers, beware of the previous acts. The curtain goes up for Act 9 next Wednesday at 9:30 pm (Eastern US).

I greatly enjoyed the story challenge! Tough for me to pick a fav because each had a different element from humor to relationships to one set to die. Thanks to all for joining in the fun. Special thanks to Dale for interacting with so many comments here and on the other blogs posting the story.

Diane Henders told her readers that we are all free and naked.

Rumor has it that a blogging dignitary is coming to my area this weekend.

The Explore series continues on Saturday featuring a wonderful video about a person, place, or thing.

To lead you into The Onion, here’s their list of pros and cons regarding the Iran Nuclear Deal.

Besides the tip in this post, Diane also got this song in my head, so it’s perfect to send you into the weekend … Aaahoo! Have a safe weekend and in the words of Garrison Keillor, Be well, do good work, and keep in touch.