On Politics
Cheers to Congress for not doing something stupid this week … so not being in session is helpful.

As an independent with a small streak of Libertarianism, Sen. Rand Paul (R-KY) has the knack of getting my attention … then causing me to shake my head after he keeps talking.

Because Cincinnati borders Kentucky, we (in Ohio) get our share of news about Kentucky, including political ads for their contested Senate race. My anti-McConnell readers will appreciate this TV ad.

On This Week’s Headlines from The Onion
Police satisfied after drunk man assures them there’s no problem
7.1 billion demonstrate in favor of global warming
Teacher who learns more from her students than she teaches them fired
Johnson & Johnson hoping brand won’t be tarnished if they dip into lethal injection game
Too late now to switch from checkout lane with talkative cashier
NASA administrator resigns after leak of offensive anti-moon email

On Potpourri
Our local pro football team (Cincinnati Bengals) made national news in early September when they kept a player who should have been cut. The player, Devon Still, had more important things on his mind as his 4-year-old daughter is battling stage 4 cancer … and by keeping the player on the roster, the family receives medical insurance. The Bengals also started a fund-raising effort by donating 100% of the sales of his jersey (#75) to a children’s cancer fund. To date, people across the country have bought over 1,000 jerseys … and at $100 each, that’s over $1 million dollars raised so far. By the way, the young girl had surgery on Thursday (yesterday), the same day Cyndi Lauper and Sara Bareilles released the Truly Brave video to raise money for the fight against pediatric cancer .. and yes, the young Miss Still is in the video.

Here’s an interesting graph, which is in the article above about Germany. 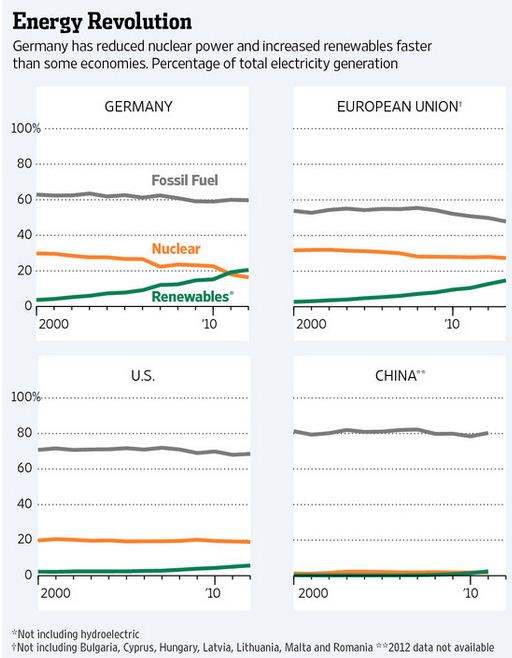 I’m bummed because Sharna’s partner was booted from Dancing with the Stars this week.

There will be a Saturday Morning Cartoon post for your Saturday!

To send you into the weekend, here’s a hit from 1971 by a Canadian band. Enjoy One Fine Morning by Lighthouse, and I hope this weekend brings you three fine mornings. Have a safe weekend and in the words of Garrison Keillor, Be well, do good work, and keep in touch.

On Politics
On November 19, 2010, I first asked for it on this weekly post (evidence 1)…. and earlier this week I learned it’s finally going to happen. (evidence 2) … the Palin Channel. Nothing like paying for any-time nincompoopery.

Cheers to Congress for going on their well-earned August recess for accomplishing very little. Throw them all out!

Cheers to the US Senate for quickly and unanimously (97-0) confirming a new secretary to lead the Veterans Affairs (VA) Department – Bob McDonald – yes, a Cincinnatian.

Not long ago I posted this link to a view about the policies of Kansas Governor Sam Brownback (R). Here’s a new link to a counterpoint.

Thursday (at 12:30 pm) I received a robo-call from my representative inviting me to a telephone town hall meeting that started at noon.

Some Ohio Republicans in the state legislature are trying to Ohio to repeal the state’s commitment to the new Common Core educational standards. That a way … follow the lead of education leader Louisiana!

On Potpourri
Dollar Tree buys Family Dollar. These discount stores (and their competitors) have become big business over the past 10 years. Nonetheless, I thought this Wall Street Journal headline was a bit tacky: Battle for Poor Shoppers Fuels Dollar-Store Deal.

I see sizeable gaps in this scale. Locally-brewed beers in the USA has experienced tremendous growth in recent years. I recently discovered these designation standards based on annual production: Large Brewery (at least 6 million barrels) and Craft Brewery (less than 6 million barrels). However, Craft Breweries can subdivided into Regional Brewery (15,000-16,000 barrels), Micro Brewery (less than 15,000 barrels), and Nano Brewery (up to 100 barrels). FYI for beer lovers: Here’s an article for the Wall Street Journal.

Because people want to know, here’s an informative video about why dogs smell butts.

Cheers to another successful installment of Life: The Musical. At the time of writing this, 25 songs are in Act 8!

Due to a full plate, no Saturday Morning Cartoon post this weekend. However, I can say this is a new month … so welcome to August.

To send you into the weekend, here’s something with flavor of the new month. Hot August Night was not a song, but an album by Neil Diamond. (Debra, where you there?) However, the opening tune from that night at the Greek Theater in Los Angeles become popular – so enjoy Crunchy Granola Suite. Have a safe weekend and in the words of Garrison Keillor, Be well, do good work, and keep in touch.