This is an abridged version of a story because they were many more events than these.

(The people) didn’t consume many of the beverages we drink regularly today. Not only were there few nonalcoholic juices (citrus fruits being unavailable and other fruits fermenting like grapes), but coffee and tea were expensive, milk spoiled quickly, and water frequently was brackish and disease-ridden. Ironically, health and safety constituted the primary advantage of alcohol.

These were the typical conditions in the US for the early 1800s, thus what a young man from New Jersey encountered when he headed west in 1803 to start a new life in a frontier town known as Cincinnati, Ohio. Arriving full of hope and optimism, Nicholas Longworth became a lawyer and a real estate mogul – and given Cincinnati’s location in the westward movement, he became wealthy as the city grew.

Longworth was also a man of temperance, but saw wine as a beverage of moderation that would improve life for the commoners. Keep in mind that wine wasn’t in the picture because supply was limited to imported European wines and mainly drank by the elite – and yes, banishing wine was not part of the temperance movement at that time.

Thomas Jefferson, the US President at the time and early spokesperson for wine in American, not only loved European wines, he believed America could also make great wine. His enthusiasm drove him to try cultivating European varietals in Virginia, but he was unsuccessful Native American varietals grew in the wild, but made poor wines. As other were unsuccessful throughout the east, the curious began hybridizing American and European varietals.

Nicholas Longworth made his first wine in 1813, but it was a fortified wine that was over 20% alcohol, thus far from the 12% dry table wine he wanted to make. Therefore, in 1825 he purchased a little known hybrid from Maryland called Catawba.

Experimenting with separating skins from the juice, Longworth produced a sweet wine that Cincinnati’s growing German population enjoyed. He kept trying with different grapes and techniques, and in 1842 accidentally discovered a second fermentation producing a sparkling, which led to a new problem – exploding bottles.

Fortunately, Nicholas Longworth had deep pockets to fund his passion, so he kept trying. By the 1845, his wines were getting national attention, thus production was around 300,000 gallons (over 1.1 million liters) per year. By the end of the decade, grapes covered over 2,000 acres in the Cincinnati region. The wine even inspired this poem by Henry Wadsworth Longfellow: The Ode to Catawba Wine. 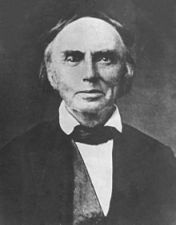 In 1860, a disease (blight) hit the region’s grapes – and the grapes suddenly vanished. Longworth died in 1863 at age 80, but his son was unsuccessful at revitalizing Cincinnati’s wine industry.

Longworth’s dream lived on through others (including former employees) as growing grapes moved west to Missouri and eventually California – all building on Longworth’s knowledge. This is why Nicholas Longworth – the one who came to Cincinnati for a new beginning, earned his title: the Father of the American Wine Industry.