Torture and Guantanamo continue to be in the news. Here are some random thoughts on the latest.

On Congress
Seems Republican Leader John Boehner is questioning the handling of Speaker Pelosi’s knowledge of torture issues. Beware Mr. Boehner, as a leader I also have same questions for you regarding torture during the previous administration: What did you know? When did you know it? As I’ve noted before, I want to know who in Congress knew … that’s Democrats and Republicans!

Specifically on Speaker Pelosi, sure the meeting was classified, but there are ways to question. Madam Speaker, it seems that you blew it.

Meanwhile Republicans lost their bid for a bipartisan probe about Pelosi (252-172). Let me off a suggestion to everyone in Washington that also saves time and money. Just publish a list of all members of Congress who were briefed, and then it’s up to the citizens.

On Media Reports
Recently columnist Leonard Pitts used a Sergeant Schultz reference regarding Speaker Pelosi. Hmmm, wish I would have thought of that anology.

Former Speaker Newt Gingrich called for Speaker Pelosi’s resignation if she knew. Hmmm, wish I would have thought of that too. The difference being that I mentioned it first and he’s already changed his mind.

As the Democratic left continues to be upset on this issue (Newsweek), hats off to the President for working with the center. There’s something I really like about having the left and the right upset at the same time.

If the current Obama policy is more like Bush-Rice than Bush-Cheney, does that mean some Republicans are currently against what they were previously for and some Democrats are now supporting what they previously opposed? The phrase from legendary Yankee announcer Mel Allen is fitting: “And how about that!”

On Pelosi and Torture
As Nancy Pelosi continues to two-step around what she didn’t know about military torture, I’ll simply say I don’t believe her. Again, I have three questions to Congress: Who knew? When did they know? Why did they remain quiet? ….And the Republicans are correct here.

At least the previous administration is admitting making the decision, so please step down Madam Speaker.

On Continual VP Cheney Comments
Dick Cheney repeatedly talks about how the Bush Administration kept us safe after 9-11. I have one question: 9-11 was on your watch. Besides blaming the Clinton Administration, where was the protection?

On Two Suggestions for Congressional Republicans

On Wanda Sykes
Did the comedian cross the line with her jokes about Rush Limbaugh? Yes. Is the incident worth all the coverage? No … just like Rush. Get a life people!

On Evolution Again
In Vol. 23 (last week) I mentioned the books I’ve been reading about evolution and religion. Then Kathleen Parker provided this timely column.

On Alfred Wallace
I don’t know how many people know about Alfred Wallace. With his studies in SE Asia, he is actually Charles Darwin’s co-discover of natural selection as the mechanism of evolution. Here’s a National Geographic story on the lesser known naturalist.

On Texas
Several weeks ago Governor Rick used the ‘secession’ card. I know Texans our both a proud people and proud of their history. Seems many Republican Texans like that going on their own is a good idea. Hmmm … should we beat Texans to the punch and give them back to Mexico before they leave? 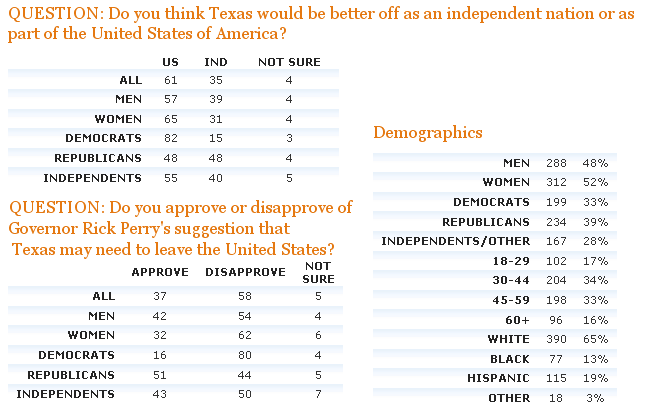 On Tasty Barbeque
Hooray! May is National Barbeque Month. I’ve got to give a shout-out to my favorite barbeque sauce – a white sauce from Big Bob Gibson (Decatur, Alabama). It serves as a great marinade too!

On Burger Grease
Everyone knows that hamburgers can be greasy. After all, burger enthusiasts love juiciness. But burger grease art? Hmmm … watch this short clip.