Many would consider scientists Richard Dawkins, Stephen Jay Gould, Stephen Hawking, Carl Sagan, Steven Weinberg, and Edward O. Wilson are oracles. After all, they are respected voices in their field and many look upon as eloquent public intellectuals.

Besides being accomplished scientists, each is a successful writer. The group has achieved countless awards, including a Nobel Prize and two Pulitzer Prizes. Each of them have shaped the public’s perception of science and its relationship with other fields. Yes, these six people are oracles of science. 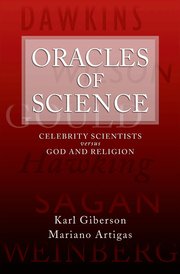 Karl Giberson and Mariano Artigas wrote Oracles of Science: Celebrity Scientists versus God and Religion to examine each of these luminaries and their views regarding the interchange between science and religion. The group’s belief system ranges from atheist to agnostic to humanist. Some respect religion while others are openly antagonistic. Meanwhile, the authors (both physicists) are Christians – with Artigas also being a Roman Catholic priest.

Each oracle has his own chapter, thus readers can engage the oracles in any order. Not only does each chapter focus on the oracle’s own words, the authors respectfully engage with the oracle with their own ideas and reactions.

Whereas the opening chapter sets the stage for what is to come, the final chapter examines similarities and differences while offering conclusions.

Regardless of one’s religious preference – Protestant or Catholic; evangelical or fundamentalist; evolutionist or creationist; religious, atheist, agnostic, deist, humanist, materialist, or naturalist – this is a good book for those who enjoy thinking.

Because of the nature of the topic, the stature of each oracle, and the counterpoints by the authors, I can guarantee that readers will disagree something. The question is can one agree or disagree with the same integrity and respect that the authors demonstrate? After all, that is one thing missing in many conversations about this topic.

Humility – a 14th century word from the Latin humilitas

Humility – a state of being humble

Humility is not thinking less of yourself, it’s thinking of yourself less. (C. S. Lewis, novelist)

I claim to be a simple individual liable to err like any other fellow mortal. I own, however, that I have humility enough to confess my errors and to retrace my steps. (Mahatma Gandhi, leader)

I don’t have a set of tenets, but I live an ethical life. I practice a humility that presupposes there’s a power greater than myself. And I always believe, don’t inflict harm where it’s not necessary. (Michael J. Fox, actor)

If I could I would always work in silence and obscurity, and let my efforts be known by their results. (Emily Brontë, author)

Personally, I rather look forward to a computer program winning the world chess championship. Humanity needs a lesson in humility. (Richard Dawkins, scientist)

What kills a skunk is the publicity it gives itself. (Abraham Lincoln, U.S. President)

Who is more humble? The scientist who looks at the universe with an open mind and accepts whatever the universe has to teach us, or somebody who says everything in this book must be considered the literal truth and never mind the fallibility of all the human beings involved? (Carl Sagan, scientist)

Enjoy this video with more wisdom from Carl Sagan about humility. 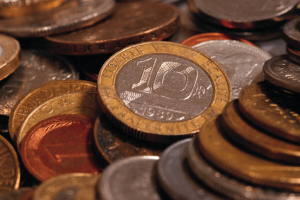 A coin is an interesting analogy. On one side is a group of Christians who say one cannot believe in evolution and God. In their own mind, this group believes they speak for all Christians.

On the coin’s other side are some agnostics and atheists who profess that all Christians obviously believe in the literal interpretation of the Genesis creation. Others even proclaim science and Christianity as incompatible, thus Christians must reject science.

Interestingly, these two sides of the coin are the polar opposites who publicly launch diatribes at the other while dominating the news on this topic. However, both sides also fail to realize or accept that there is much more to the coin than opposing surfaces – therefore, more to this story.

As the conservative Christians embrace a literal Genesis, I continuously wonder why they give God so little credit. Besides, they are in the minority of Christian thought and don’t realize it. On the other hand, the agnostics and atheists who pigeon-hole all Christians as disciples of a literal Genesis are failing to realize how many (and yes, the majority) Christians appreciate and embrace the role of science in our world, including evolution – therefore missing the connection to our common opponent.

I have encountered literal Christian and the agnostics and atheists who pigeon-hole all Christians. My personal and independent journey of studying the science-theology interchange not only deepened my Christian believes, I also developed a greater understanding and appreciation of the thoughts from agnostics and atheists. For the sake of this post, I categorize this group into three subgroups: the atheists, the worshipping agnostics, and the uninvolved agnostics.

The atheists can be a difficult bunch. Two prominent science writers, Richard Dawkins and Jerry Coyne, use scientific reasoning to justify their anti-Christian crusade. While both these passionate scientists are strong voices for evolution, their rational regarding the non-existence of God lies outside of the boundaries of science. (Past post about boundaries) Besides, religion is about faith – a love relationship that involves trust – thus not a belief system grounded in the scientific method. (Past post about faith)

I admit having a difficult time giving these anti-religion crusaders any credence on this issue, which is partially due to their tone of choice. However, I realize not all atheists are as dogmatic as these two scientists are because not all nonbelievers are antagonist to Christians – thus, I find it easier to accept and respect the nonantagonistic atheists and agnostics.

The agnostics are a broad group. Some have never been exposed to theology, thus do not know. Others do not care to know. Others encountered events involving human behaviors as acts of evil and injustice causing them to move away from their prior belief system. Yet, in many cases (if not most) these agnostics are not antagonist to those who are religious.

Carl Sagan is a wonderful example. Although there were times in his life when he challenged religion, he gave religion space during most of his life. There is no question that Sagan marveled the universe. However created, Sagan proudly stood in awe of the universe. Although he did not worship it, he understood the majestic nature of the universe and the role of our Pale Blue Dot. Simply put, his words are an inspiration to anyone with wonder!

Agnostics as Ursula Goodenough and Paul Davies have a different belief system from Sagan. Although not believing in a heavenly god, they see the glories in nature as indicators of the presence of a god in nature – thus the term religious naturalism. Their awe and inspiration are similar to Sagan’s, but they differ from Sagan in their application of god – not a god as a creator, not the God of Abraham, but a god who is present within the complexity, patterns, and mysteries of nature. Like Sagan, their words also inspire.

Prominent writers Michael Ruse and the late Stephen J Gould are examples of another group of agnostics – nonbelievers acknowledging space for theological thought as long as theology does not conflict with the way science works. In his NOMA model, Gould (a self-proclaimed no believer and agnostic) explains religion and science as non-interfering subjects – a similar approach proclaimed by Christians as Augustine, Galileo, Sir Francis Bacon, Johannes Kepler, and many more.

In the end, because of writers as Sagan, Gould, Goodenough, Davies, and others, I have a greater understanding, appreciation, and respect for agnostics and atheists, along with their view of the natural world. Yet, in the end, I hope those on the opposite side of the fence as I not only become more tolerant to the theological who embrace science, but also understand we share a common view against Biblical literalists. After all, the science-theology conflict is between religions – not one between science and theology.