One never knows what encounters lie ahead when strolling through the city.

Batsakes is one of the few custom hat makers remaining in the US (for those who want to know more about this local treasure, here’s a short video) 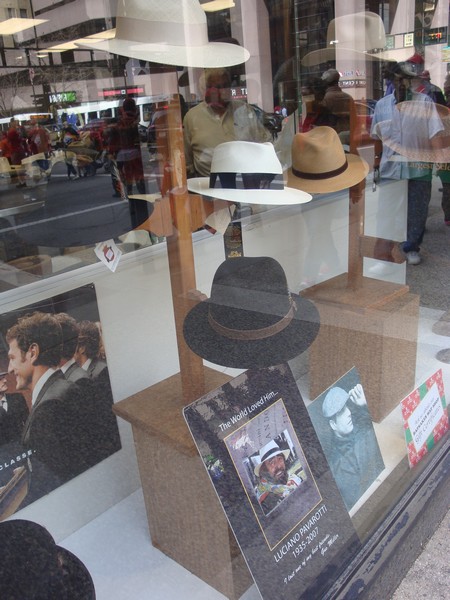 Because of Larry Flynt’s (of Hustler Magazine fame) love affair with local law enforcement, there is a Hustler Store … Did you see the movie? 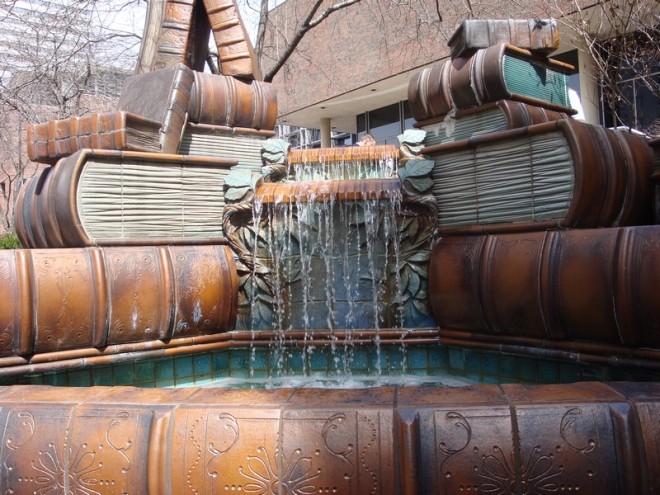 For those who watch Shark Tank, these guys won … but have since sold off 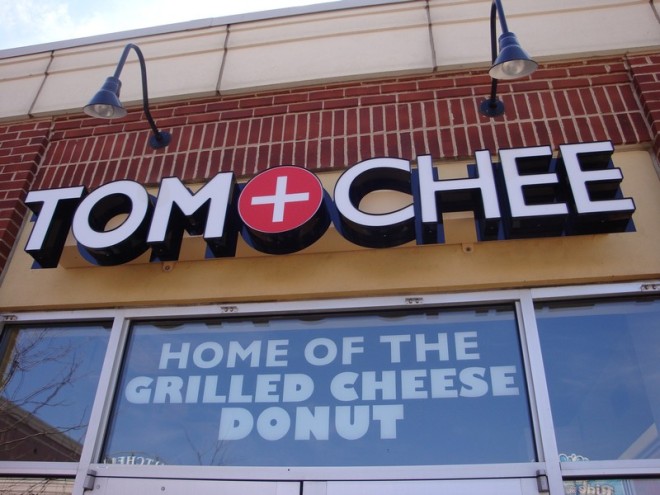 Cincinnati had Kings Records back in the days of vinyl recordings, but I didn’t know about this studio 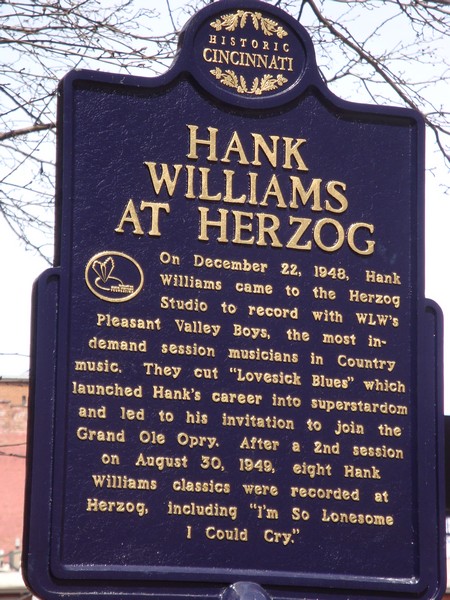 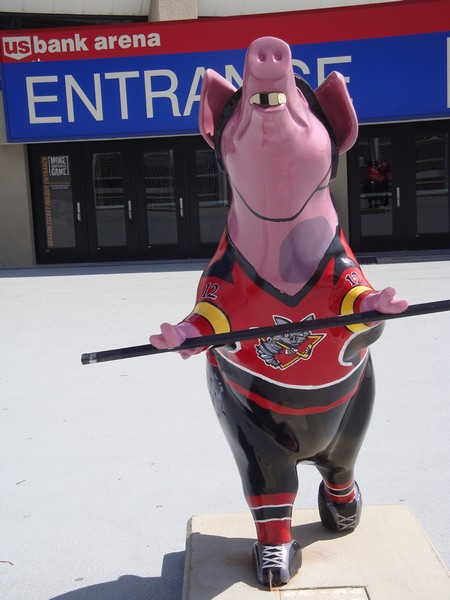 … but in Cincinnati, baseball is king.

What do you think this is?

That’s the Ohio River with a bridge connecting downtown Cincinnati on the right to Covington, Kentucky on the left.

Floodwalls are walls built to prevent water entering an area. Not every town along a river has one – actually – most towns don’t. Cincinnati doesn’t. Covington and Newport Kentucky have them, but this post is about the one in Covington.

Led by artist Robert Dafford, his team of artists created 18 murals on the floodwall illustrating the Covington’s history from 800 BCE to the present. The collection is known as the Roebling Murals because of their location near the Roebling Bridge, a suspension bridge built by the same designer before the famous Brooklyn Bridge.

Dafford also created others murals throughout the Ohio and Mississippi River valleys, plus others in France, Belgium, England, and Canada. Enjoy a look at the Roebling Murals of Covington, Kentucky. Any favorites?

Although these are very traditional, Resa needs to know about them.

Greetings. Last week was one of those rare weeks without an OITS. I was behind on the writing and replying to comments on the previous post – so I decided to pass.

FYI: I’m aiming for the next concert to be on Saturday, June 8th.

My Quickstep routine is in the books. Good news: We didn’t crash and burn. (FYI: Quickstep is not an easy dance.) We successful got through it and my partner was thrilled! For me, we did well – but I’m a tough critic on myself, so I only get a C. My partner and I have the same instructor, who choreographed a routine around this scene from An American in Paris – but we danced to this Bobby Darin version of I Got Rhythm that is definitely aerobic.

We recently wrapped up another season of handbells and ushering.

If you like rich and creamy, Graeter’s (of Cincinnati) is a fabulous ice cream (past post). They recently introduced a new summer flavor – Malted Pretzel Ball – so, I’ll be trying very soon.

Some may recall that John Roebling built Cincinnati’s suspension bridge before the more famous Brooklyn Bridge. Click here for a short (less than 2 minute) video of the bridge done by a local TV station.

As a viewer of the CBS Evening News, I already miss anchor Jeff Glor – but look forward to Norah O’Donnell anchoring later this year.

The Democratic field of presidential candidates continues to grow. Now at 24, let’s go for 30! On the other hand, I wonder about the end game of the majority of the field.

This week the Alabama state government passed the most restrictive abortion bill in the country. Although their intent is to challenge Roe v Wade in the Supreme Court, I simply say patriotism, morality, and civic duty cannot be legislated.

I have long been a critic of House Speaker Nancy Pelosi (D-CA). Her recent comment about AG Barr lying made me wince. On the other hand, I acknowledge the difficult task she has with her current caucus, and she has been done well during this difficult time.

Here’s an example of the goofy far right of Republicans. My state senator wants to ban insurance coverage of abortions except for re-implanting an ectopic pregnancy into the uterus. Interestingly, the American College of Obstetricians and Gynecologists says the procedure doesn’t exist. The senator disagrees.

According to President Trump, Hungarian authoritarian Prime Minister Viktor Orbán is doing “a tremendous job” and “respect all over Europe”. Sorry to say, that comment is not a surprise and follows praise of other authoritarian leaders from Russia, North Korea, and Turkey.

I grew up in the portion of Ohio that mined coal. Being along the Ohio River, multiple coal-burning power are still located nearby. Because we know President Trump vowed to revive the coal industry, here’s an interesting article about the source of energy for Ohioans.

To lead you into the weekly dose of satire, The Onion provides tips for going through a divorce.

To send you into the weekend and as a tribute to Cincinnati treasure Doris Day, it’s time for a Sentimental Journey. In the words of Garrison Keillor, Be well, do good work, and keep in touch.(NOTE; The video will NOT play embedded here. After you click the video below, then click Watch this video on YouTube.)

King Gambrinus is European folk hero and beer aficionado – and traveled to Cincinnati on this mural … but who is he toasting? 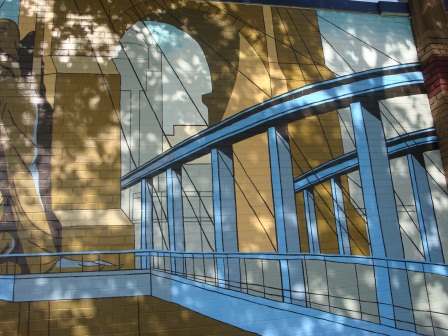 Cincinnati’s own Genius of Water is the one toasting King Gambrinus while she is leaning against the bridge – but they are actually toasting the city’s beer making tradition.

The wave of German immigrants into Cincinnati have given this area numerous traditions: such as Oktoberfest Zinzinnati (one of the Oktoberfests outside of Munich), Music Hall (an outstanding venue), and beer.

“Cincinnati is one of the great brewing centers of the continent…. The Cincinnati brewers fear no competition, because the excellence and fame of their brews create a demand for them even in cities whose brewers have a greater aggregate capital invested.” (Over the Rhine Historic Brewery District) 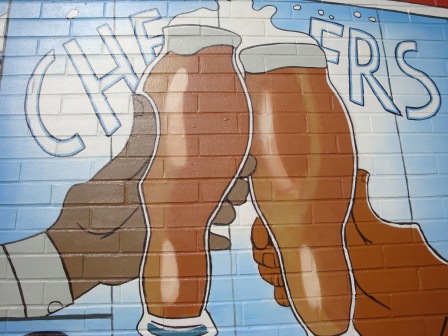 The first brewery started in 1812, and grew to almost 40. By 1890, Cincinnati brewers production of 1.115 million barrels was the 3rd largest (per capita) in the country.

That’s 40 gallons (151.4 liters) per year for each person resident – including children.

Cincinnati’s breweries and associated activities such as shipping, cooperage, malting, farming, and of course drinking; at one time was one of the largest industries in the city. 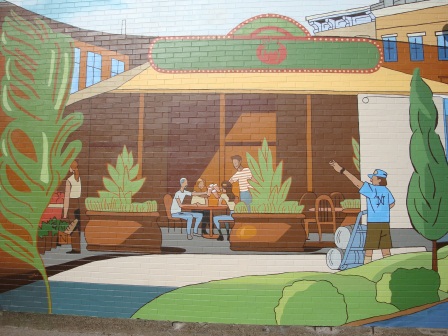 Prohibition (11919) drove the brewers and the associated companies out of business. Although many of the buildings still stand today, outside of local craft brewers, Sam Adams is the only active brewer in this part of the city. On a wall outside the Adam’s facility  at 1625 Central Parkway, “Cheers to Cincy, Past and Present” celebrates Cincinnati’s brewery heritage.

Image from ArtWorks site, which is better than mine

PS: Another ArtWorks mural dedicated to beer in Cincinnati is about 10 blocks away.

Because many other blogs are doing fall walks, let’s take a river cruise.  So, sit back and enjoy the sights … and if you like, join Guapo for a beer on the top deck.

Here, the Ohio River separates Ohio and Kentucky. Interestingly, Kentucky owns the river. Given this is a metropolitan area, numerous (I think 7) bridges exist. 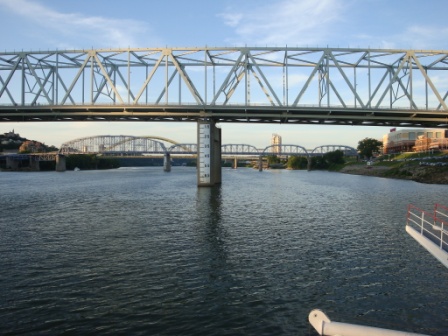 .
Not as prominent as the gold domes we saw in Russia, Cincinnatians are proud of the Roebling Suspension Bridge – the bridge serving as Mr. Roebling’s prototype for the famed Brooklyn Bridge.

.
Ready for the Halloween season – It’s the USS Nightmare serving as the haunted boat on the Kentucky side! 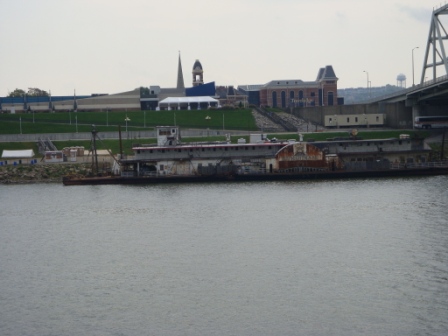 .
I grew up in a small town along the Ohio River, and river barges are a common sight – but this is a small one. 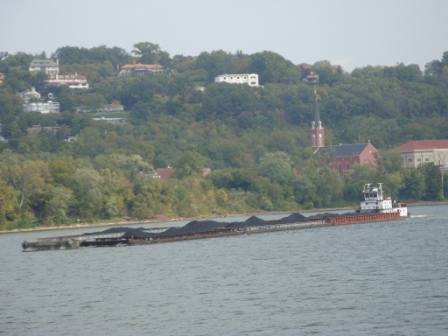 .
After reversing course in order to return to the dock, I like this view of Mt. Adams with a peek of downtown.

.
Downtown Cincinnati with the Serpentine Wall and one of the string of parks along the waterfront. This wall is the best seat for the Labor Day fireworks extravaganza known as Riverfest. Hey Guapo, 30 minutes of fireworks shot from the river choreographed to music … the waterfall from a bridge is my favorite. 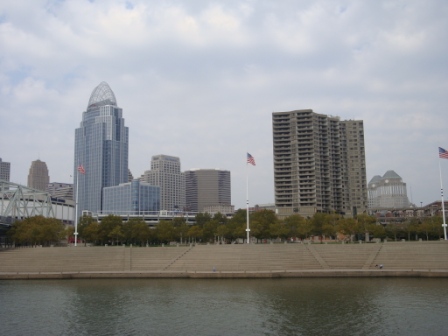 .
On this particular summer night, we returned to the dock to find our beloved Cincinnati Reds playing.

.
Hope you enjoyed the cruise.