n my ongoing journey of diving into the positive relationship between science and religion, I read Enriching Our Vision of Reality: Theology and the Natural Sciences in Dialogue by Alister McGrath. With science degrees in quantum chemistry and biology, Dr. McGrath is a Professor of Science and Religion and Director of the Ian Ramsey Centre for Science & Religion at Oxford University.

McGrath firmly believes that both science and religion are important parts of the big picture – but not the only parts. He sees science and religion are “different parts of the same reality” with each offering a different perspective. Although he unequivocally encourages readers to develop to develop an intricate understanding of nature, McGrath sees Christianity’s role (especially through the lens of natural theology) as providing greater insight into God, creation, and today’s scientific exploration.

“… both scientific and religious theories find themselves confronted with mysteries, puzzles and anomalies that may give rise to intellectual or existential tensions but do not require their abandonment. . . . In each case, there is a common structure of an explanation with anomalies, which are not regarded as endangering the theory by its proponents but are seen as puzzles that will be resolved at a later stage.”

“We all need a greater narrative to make sense of the world and our lives, naturally weaving together multiple narratives and multiple maps to give us the greatest possible traction on reality. Reality is just too complex to be engaged and inhibited using one tradition of investigation. That, I suggest, is why we need both robust theology and informed science.”

“Science dismantles the world so that we can see how things work; the Christian faith assembles them so we can see what they mean.” 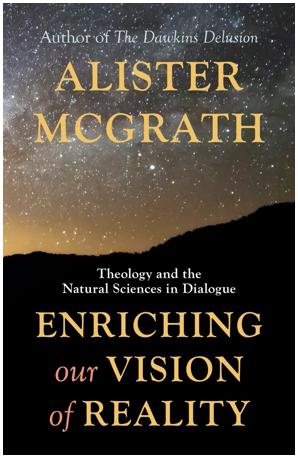 In order to understand his point of view, Dr. McGrath organizes this book in a different, but sensible, manner – three parts with multiple chapters in each part; and one part building on the next.

At pertinent times throughout the book, McGrath shares his personal experiences, including his time as an atheist – so he willing responds to notable New Atheists (particularly Richard Dawkins and Christopher Hitchens. I find this interesting because I’ve read multiple authors who have been atheists in their personal journey.

Before reading this book, my concept of natural theology related back to William Paley (19th Century) who saw nature’s design and intricacies as proving God’s existence because observable design is a sign of God’s past activity. (This thought is the general overview of those favoring Intelligent Design over evolution by natural selection.) Today’s natural theology (far removed from Paley) allows people to meld scientific and theological information in order to enhance our understanding and admiration of God’s creation.

McGrath surprised me with his criticisms of Ian Barbour’s four models explaining the science-theology interchange. Although he favors Polkinghorne’s four models, I tend to stay with Barbour’s explanation. While Polkinghorne’s model may be more centered on the theological perspective, I see Barbour’s models as an easy way for the general public to understand the different levels/stages of the science-theology relationships. After all, much of the public remains stuck in the paradigm that they must make a choice between the two disciplines. My personal journey on this topic also relates very well to Barbour’s models.

This book is well-researched and documented with 27 pages of endnotes. McGrath also provide 2+ pages of further reading materials for those wanting to know more. For me, these references also reinforces the decisions I’ve made what who and what to read

Enriching Our Vision of Reality is a thought-provoking, but not an easy read for novices on the topic – therefore I believe McGrath’s intended audience are those with more than a casual interest in theology and its interrelationship with science. I wonder if pastors are his intended audience. Then again, the intended audience could be scientists in order to expand their view of theology. For anyone interested, Kindle and paperback versions are available at Amazon.

In the previous post (On a Beach Walk: No. 12), I presented a continuum. No matter the topic, a continuum tries to categorize in order to show relationships. Positions are difficult because overlap exists between adjacent groups and each group can be subdivided into more specific smaller groups.

The continuum below is an attempt to show relationship around the topic of science and theology regarding evolution. It’s not perfect, but it illustrates different positions people hold, so it also stimulates thinking and serves as a point of discussion.

Defining each group is another important aspect. Although each definition below is far from complete, they provide a sense for each group’s position. On the other hand, representing all positions would be difficult.

Strong atheist: Lack the belief in any god and are fervently against religion.

Passive atheist: Lack the belief in any god, but are less antagonistic to religion – possibly tolerant.

Agnostic: A broad group including (but not limited to)

Spiritual naturalist: A broad group including (but not limited to) two broad groups: religious naturalists and humanists – neither believing in a god or gods.

Spiritual non-theist: Religions that are spiritual, but without believing in a god or gods; such as Buddhists, Hindus, and others

Deist: God who is not linked to any religion is the creator, but does not intervene and is not personal because God has left the world. There are different types of Deists.

Progressive Creationists: God is the creator and the earth is very old. Two groups include

Young-Earth creationist: God is the creator, Earth is young, and a literal Genesis in today’s language explains creation.

I like walking the beach as it is good for the body, mind, and soul – and refreshing on my feet.

I think about a continuum of thought – one that I’ve encountered countless times over 8 years of personal study and reflections. A continuum containing a diversity of ideas, including the antagonistic polar opposites who only see their way – a way of being one of us or one of them – a shallow continuum of two.

I know where I lie on this continuum of thought, but not at either polarized end. Not only do I know my position between the continuum’s poles, I also know that there are others like me here. Interestingly those at the ends can’t justify our existence.

I see the antagonistic groups as the Blackhearts and the Righteous. Each acting as hooligans as they shout at each other and intimidate others. I see many others who wander as if they are lost because they don’t know. I invite them to have a seat to listen, but polar opposites are preying on the wanderers by saying they have to make a choice, which is really a forced choice. I try to provide a different perspective, but either the hooligans are too loud or the wanderers are either confused or won’t listen.

Some may be thinking I’m referencing Democrats and Republicans, but I am not because that’s too painful – perhaps another day. Today my thoughts are about the interchange of science and religion – an arena where the antagonistic foes force choices upon others – especially the vulnerable and the unknowing.

I am not vulnerable. I am not unknowing. I have a place and I can respectfully and confidently take while understanding the others. I also take my place knowing the difference between right/wrong and agree/disagree.

Finally I get someone to listen. They ask questions as if they don’t hear the shouting because they want to know where they belong. They want confirmation of something they wondered, but never heard.

The continuum is a lot to ponder as I walk – but I like to walk the beach for it is food for the mind, body, and soul – and refreshing on my feet.

Science – the search for the explanation of what we observe in nature.

Science – a body of organized knowledge that describes the properties and interactions of the material components of the universe.

Science – a human endeavor limited to the human perspective seeking to understand and explain phenomena occurring in the natural world and the laboratory.

Science – a dynamic (not static) intellectual human endeavor leading us to a deeper understanding of the natural world.

Science – an impersonal process requiring a trained mind with passion, imagination, and patience for details to find patterns, structure, connections, and history within nature.

Science – a data-gathering process so we can better understand ourselves, the natural world around us, and our place in this world.

Science – an intellectual activity using the senses and technology to extend the senses for gathering data to develop an explanation based on evidence and what is already known.

Science – a process and activity requiring a conscious mind that observes, inquires, organizes, interprets, understands, and a willingness to follow acceptable scientific methodologies while staying within nature’s boundaries – yet that does not mean that nothing exists outside of nature’s boundaries.

Science – the study of the material, processes, and forces of the natural world.

Science – not a belief system, but a learning system involving the exploration of natural causes to explain natural phenomena through systemic processes and procedures.

Science – an empirical human endeavor by establishing questions of truth through experimenting and testing without absolutes while remaining open to retesting and reconsideration.

Science – a gift as it brings us new knowledge, yet knowledge that is only for a given point in time because it can change based on newer knowledge. Because of potential development of new knowledge, science must be willing to have what is currently known to be proven wrong.

Science – a system giving us gives theories: a structure of ideas based on large amounts of evidence that explain and interpret numerous facts about a concept – therefore, well beyond a personal opinion or a detective’s hunch.

Science – a habit of mind of careful sifting of data and withholding of final judgment.

Science – a methodology that does not make moral, ethical, and value judgments for society because those judgments are made by society.

Science – a way of knowing, but not the only way because science does not corner the way to truth about everything. Philosophical, theological, psychological/emotional, ethical, political, and historical views provide additional perspectives, yet each discipline is selective and limited.

Science – an activity bringing forth new issues causing humanity to face moral and ethical questions – whose answers science does not provide because it is neither equipped nor competent to answer ethical and moral questions, let alone the metaphysical, philosophical, or theological questions as “what is the meaning of life”, “why am I here”, and “is there a god?”

Science – a study that is limited to itself. Science cannot prove or disprove God’s existence because that question/topic lies outside science’s self-imposed boundaries of the observable events in the natural world around us.

Science – a study that should be embraced by all.

Science is not an opinion.

Science is not democratic.

Science is not an ideology.

Science is not a theology.

Science is not a belief system.

Science is not a theory.

Science is not a political view.

Science is not a trend.

Science is a human endeavor.

Science is a way of knowing.

Science is limited to the human perspective.

Science is a methodology.

Science is a search for explanations of what we observe in nature.

Think about it – Disagreement around scientific topics is common in our lives. Whether it be evolution, climate change, vaccines deforestation, energy resources, or environmental standards (to name a few), a sizable number of people reject aspects of science for a variety of reasons – especially political, theological, and/or other ideological views … all reasons that are not science.

A Frank Angle
Blog at WordPress.com.