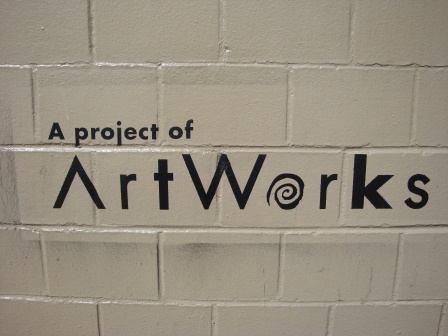 ArtWorks is responsible for adding over 100 murals throughout Cincinnati – of which many are in the main part of the city. Thanks to Resa posting about street art in Toronto and Winnipeg, she has heightened my interest in these wonderful works of outdoor art that is in my city.

The one mural featured in this post first caught my attention several years ago when it I first saw the nearly completed version that was covered by scaffolding. Because I didn’t know much about why this mural was selected, its color and unique style caught my eye.

ArtWorks selected this design to be part of its Cincinnati Masters series – a collection of murals dedicated to the work of Cincinnati artists. Maybe in the future I’ll put them together into one post. To be honest, I didn’t know this artist – then again, I don’t claim to be knowledgeable about art. So, I decided to do this post in the style of a famous television game show – Jeopardy!

Answer: He moved to New York City where cartoon strips were his initial success, but after 5 years he decided to pursue painting

Answer: The Great American Nude series brought him fame in the art world

Answer: He became well-known for his American Pop Art, and a contemporary to Andy Warhol

Answer: He also developed his own techniques of using metals in metal-work sculptures; such as The Dropped Bra

Answer: His Still Life is another series – Still Life #60 is a collection of things a woman will wear – causing some to suggest these object take the place of a nude while suggesting her presence.

Answer: His mural is located at 811 Main Street in downtown Cincinnati

Question: Who was Tom Wesselmann?

Although this mural caught my attention, I’ve never heard of Tom Wesselmann … at least now I know. Thanks ArtWorks!

To see more posts about the ArtWorks murals in Cincinnati, click here. Meanwhile, here’s a short video featuring Wesselmann’s work … and don’t forget to visit Resa to see the urban art she has captured.

When locals think of a title of this blog post, people like Doris Day, Rosemary Clooney, Andy Williams, and Nick Lachey come to mind. So do groups such as the Isley Brothers, The Lemon Pipers, Blessid Union of Souls, Pure Prairie League, Walk the Moon, and 98 Degrees. We old timers can add Roy Rogers, Homer & Jethro, and Grandpa Jones to the list.

But this post isn’t about any of the above. If anyone influenced this post, it’s Resa – the Canadian lady in Toronto who features murals on her blog (Graffiti Lux and Murals).  After all, because of Resa, I notice murals now more than I ever did.

Special thanks to Art Works: “an award-winning non-profit organization that employs and trains local youth and talent to create art and community impact through three strategic programming areas: Public Art, including an extensive mural program; an art therapy division, ArtRx; and an entrepreneurial arm, Creative Enterprise.” (from their website)

FYI: ArtWorks recently announced that local icon Rosemary Clooney (a Grammy Lifetime Achievement Award winner) will be honored with her own mural, which is to start this summer.

Mr. Dynamite @ 1437 Main Street
Yep, that’s The King of Soul. No, James Brown wasn’t born in Cincinnati nor did he live here, but many of his early hits were produced at Cincinnati-Based King Records. 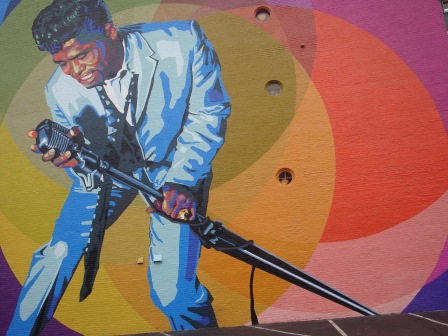 The Singing Mural @ 1223 Central Parkway
This mural is a celebration of the arts and a salute to Cincinnati’s cultural legacy with the arts. Fittingly located near Music Hall, the mural features locals, cultural icons, and classic characters. Do you recognize anyone? (The list of people is below the last image.) What song do you think they are singing? 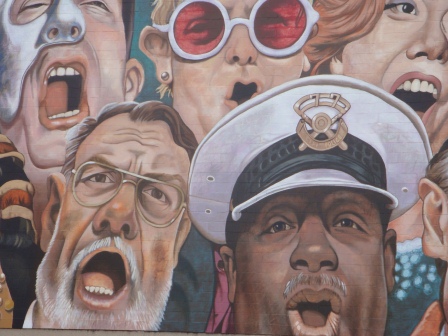 You may recall two past posts (this one and that one) about attending this year’s Opening Day festivities in the city. As I walked many miles, certain sights reminded me of Resa – a Canadian photographer who uses her blog to share the graffiti art and murals she finds in cities. (If you visit her blog, tell her I sent you.)

Granted, on this day I wasn’t prowling Cincinnati’s city center looking for outdoor murals, but because I thought of Resa each time I stumbled across a mural, I knew a post was in the making. Enjoy some of the murals I captured on this day. Which is your favorite?