Last fall we spent some time in New York’s Finger Lakes region. Given May was Finger Lakes Wine Month, thus I missed the perfect chance to look back. Oh well, better late than never

The Finger Lakes region is in central New York, far from the hustle and bustle of New York City. On the map, there are a series of long, narrow, parallel lakes looking like fingers, which are actually very deep.

For many years I’ve heard of people vacationing to the Finger Lakes region – but the urge to go never overwhelmed us enough to act on a trip. Given last year’s change of address, 2014 turned out to be a good time for a driving vacation.

As people who enjoy the fruit of the vine, wine was our primary focus. Although known for many years for its sweet, low-cost wines, todays Finger Lakes winemakers produce very respectable wines. 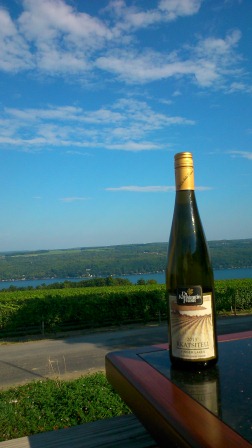 Anyone expecting hardy reds will be (for the most part) disappointed. Reds as Cabernet Franc and some blends are good, but far from the deep, rich reds from California or Washington.

Riesling is king of grape in the region. Although I prefer a wide variety of red wines, Rieslings have captured my attention for a long time. Similar to their Germans and the French Alsatian counterparts, Finger Lake winemakers produce Riesling in a variety of styles, which range in sweetness and dryness. 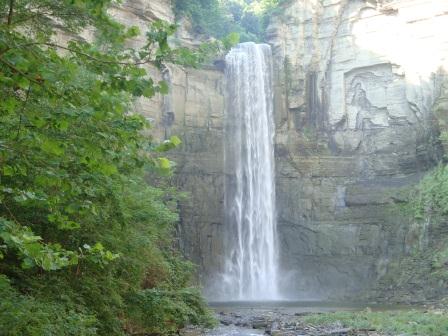 Ithaca is one the region’s largest cities (30,000+), and is home to Cornell University. Because one of my Bucket List oddities is to visit all the Ivy League universities, we enjoyed the campus, the botanical gardens, and arboretum. 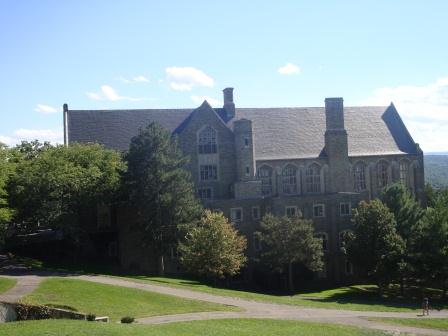 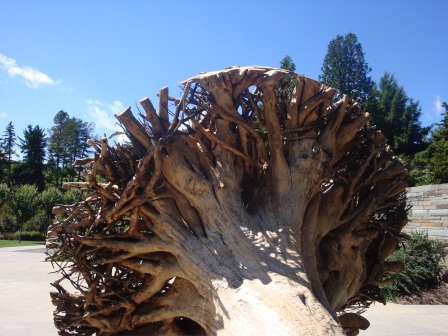 Corning (population 11,000+) is less than an hour away, and home to the Corning Museum of Glass. Our original itinerary didn’t include a stop, but to me, this was the biggest surprise of our trip. Simply fabulous!

A masterpiece by Tiffany at the Corning Museum of Glass

For readers in the northeastern US and eastern Canada, the Finger Lakes region is a worthwhile destination – so, consider it.

Greetings! This is the 223rd edition of Monday Morning Entertainment, yet the 222nd edition was for the first Monday in August. Whew … it’s been a while!!!

Being away for some time means there is much to share, but I’ll start with a traditional question – How was your weekend?

We returned from our road-trip vacation last Sunday, but this past week was filled with dance lessons, the final weeks of golf league, and a baseball game (the Reds won, but it has been a horrible season), which propelled us into a weekend roadtrip. After attending a college football game Friday night in downtown Cincinnati, we started our 200-mile (320-km) drive northward to attend another college football game (and about 14 hours separating the end of one game and the beginning of the next) … and then the 3-hour drive home after the game. We saw a lot of offense and two wins (58-34 and 45-42) … and it was good to be back on the campus where my wife and I meet. Both singing the alma mater and a win in the final seconds choked me up a bit. Sunday morning was a bit different as I watched, listened, and enjoyed to the handbell choir from the audience, but I don’t think anyone noticed I wasn’t playing (which is fine with me).

Although I probably won’t post everyday this week, Life: The Musical returns with Act 9 featuring a significant part of everyone’s life – Work … so song titles must include Work, Working, Worker, Worked, or any occupation – the latter widens the opportunities. However, an occupation can only be used once.  Get your songs ready because curtain goes up Wednesday, 9:30 pm (Eastern USA).

The previous post had a few pics from our vacation of undisclosed destination. Cheers to those picking out some of the locations. The stops on our trip were Kentuck Knob (a Frank Lloyd Write gem), Gettysburg PA (Civil War batttlefield), Cooperstown NY (Baseball Hall of Fame), Cornell University, Taughannock Falls, Finger Lakes Region (especially for wine & cheese), Grand Prix Festival (Watkins Glen NY), the Corning (NY) Museum of Glass, and Fallingwater (the Frank Lloyd Wright masterpiece). Note: The links are to sites or Google Images.

Celebrations for the week

To send you into the week, here a good one courtesy of Jimmy Fallon’s Tonight Show. Enjoy … and have a good week!