On Politics
For those you think the Tea Party is dead because of its unsuccessful showing in Tuesday’s primary, think again because if nothing else, it has shifted the party to the right.

As Washington examines issues at the Veterans Administration (VA), comments by members of Congress demonstrate to me that they are more interested in political gain than solving the problem.

On This Week’s Headlines from The Onion

On Potpourri
Meryl and Maks were very deserving champions of Dancing with the Stars. Although some complained about co-host Erin Andrews in her debut season, but I say bring her back. 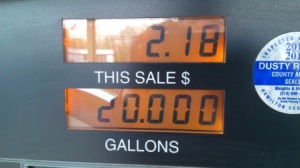 I took this picture about a month ago after getting some gas.

Thanks for the wonderful music in Act 4 of Life: The Musical. I love getting different genres of music!

With Monday being a national holiday (Memorial Day) in the USA, I will not have a Saturday Morning Cartoon Classic post this weekend. I know … this pattern is too frequent, but I’m still digging out of my hole from the move.

With Saturday being Lucky Penny Day, here’s a question to answer. If you see a penny on the ground with the tails side up, do you pick it up?

To send you into the weekend, let’s celebrate Morse Code Day (Saturday) with this hit from 1967 … Western Union by the Five Americans. (The song starts 1 minute in.) Have a safe weekend and in the words of Garrison Keillor, Be well, do good work, and keep in touch.

On Politics
The holiday was a good break from the goofy world of politics. Even in that setting, microphones have a way of keeping the idiots in the news.

To me, the recent Bridgegate episode involving the New Jersey Governor’s office is an example of abuse of power for political gain.

This week’s preview of Robert Gates’ upcoming book was interesting. Here’s an interesting commentary by a visitor here, so thank you Jim Wheeler.

One way governors (primarily Republican) balance the state budget is by keeping money that would have gone elsewhere in the state. This recent Cincinnati Enquirer editorial is a good read. (Note: Southwestern Ohio is strongly Republican.)

On Potpourri
Because winter is not yet over, The Onion’s tips for keeping warm are excellent.

Special thanks to my top five commenters: Elyse @ Fifty-Four and a Half, Rich @ BrainSnorts, Lame @ Lame Adventures, Marina @ Arts Towards a Happy Day, and GingerFightBack @ GingerFightBack. For those interested in annual reports, here’s mine.

For me, it’s been a very busy time, thus why I haven’t been visiting as much as I like.

Sorry – no cartoon post tomorrow because there is simply too much on my plate. However, I will aim for next Saturday.

This week delivered the final act of Time: The Musical. The applause was a roar, but I saw a few tears as guest were leaving. Just for those who stick around for the movie credits and the occasional extra nugget, a prologue is coming soon.

For those wondering, yes – a new musical is on the horizon – but the theme remains TBA (to be announced).

Here are your weekend celebrations

Have a safe weekend and in the words of Garrison Keillor, Be well, do good work, and keep in touch.