Ohio lost a native son who was a statesman an American hero at age 95. John Glenn is one of the original Mercury astronauts who became the first American to orbit our planet, then went on to be a respected US Senator representing my state for 4 terms, a presidential candidate, the oldest person in space, a fighter pilot, and all around good guy. In the famous words spoken by fellow astronaut Scott Carpenter just before Glenn’s historic launch, “Godspeed, John Glenn.”

The Kennedy Center Honors event was recently held, so mark your calendars for the televised event – Tuesday, December 27th, 9-11 pm (Eastern US) on CBS. To me, it’s one of the best entertainment shows of the year.

The demands on the handbell choir during the holiday season continues this weekend. Veni (by Jason Krug) is an interesting twist on a popular carol … just click to listen.

Despite President Obama’s effort, I overcame his obstacles and found my Spumoni ice cream.

Some of you may remember the use of wine corks in our home. Meanwhile, this 1+ minute video offers some clever uses for wine corks.

Even though we didn’t know any of the songs from the musical, we watched Hairspray Live. We were surprised by the quality of Dancing With the Stars’ Derek Hough’s voice. Jennifer Hudson and Kristen Chenoweth delivered impressive performances.

I’m still getting some hours at the golf course; therefore causing me to wonder about the ones playing on cold days.

I worry about the Bengals playing the winless Browns this weekend.

President-Elect Trump talks about unifying a divided America, yet several of his Cabinet nominees promote division.

Early in the week I heard only bits of an interview that I imagine I would have greatly enjoyed hearing it in its entirety. I found the author’s 3 categories of voters quite amusing: Hobbits, Hooligans, and Vulcans. Here’s a book review.

The fake news story and the subsequent event about Hillary Clinton running a child sex ring out of a popular Washington pizza restaurant was too weird on multiple levels.

A tip of the cap to Senate Majority Leader Mitch McConnell’s (R-KY) 7-minute tribute from the Senate floor to Vice-President Joe Biden (D-DE). See it here.

To lead you into this week’s dose of satirical headlines, here’s an actual headline from The New Yorker that is very Onion-esque: Ben Carson warns that the Bible makes no mention of housing or urban development … that is just too good because President-elect Trump selected Dr. Carson to be in his cabinet as Secretary of Housing and Urban Development.

Here’s a 2-fer to lead you into the weekend: hits from two recent Kennedy Center Honors recipients. Hope all is well with you, and in the words of Garrison Keillor, Be well, do good work, and keep in touch.

Corks have a story. We may associate them with a vacation or a special occasion, Wineries make choices to display images, names, saying, regions, phone numbers, websites, and more.

Wine is a decorating theme in our home. Bottles, presses, and corks are easily found. (a past post)

In terms of corks, all wine corks are not created equal. 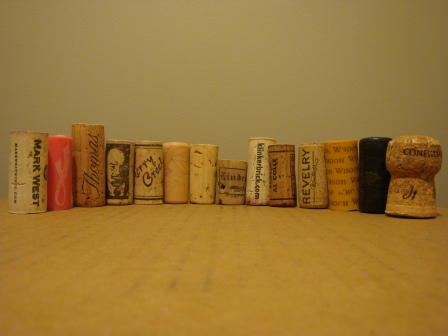 This is a small cubby in our lower level. The angle on the upper left is the stairs. Some in our neighbors have a wet bar in the space, but we went with just the counter. 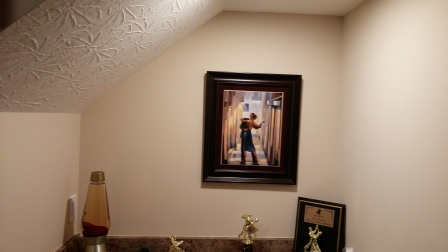 This past January, my wife showed me an interesting image from Pinterest. I suggested we could do that in the lower-level cubby. After researching possible designs on Google Images, ideas were racing through my mind. The key question was original free-form/abstract or uniform? Measurements and calculations allowed me to estimated the need for 1050-1100 wine corks (if corks occupied the entire space).

After the easier-than-expected collection phase, I began designing. My initial thought was to put together a variety of designs on the mock-up to see what we liked and disliked. But, as I got going, I changed and tweaked as I progressed. 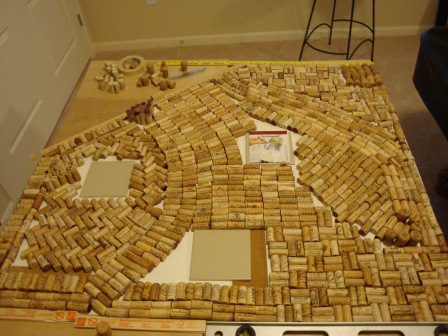 A few weeks later we were in a new restaurant for my birthday, and we saw several cork designs – and my wife liked a particular uniform design. Because I had so many corks, I created a second mock-up (in about 40 minutes) so we could compare.

During my cork collecting phase, I got an idea that friends thought was crazy. Whereas people were shocked to learn that I was on the prowl for 1000 corks – but then I told them I changed my goal to 1000 different corks – and no plastic ones.

With two prototype designs completed, my wife and I preferred different designs. While she found the eclectic design too busy, I found it easier on the eyes. Whereas she liked the uniformity of second design, it was a blurred to my eyes. So the challenge became to create something relatively uniform to fit her taste, yet be easy on my eyes. 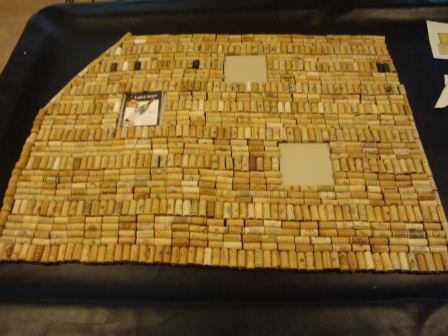 As for the actual construction, first step was cutting a piece of plywood to fit the back wall. This would serve as a surface for mounting the corks (as opposed to attaching them directly to the wall). 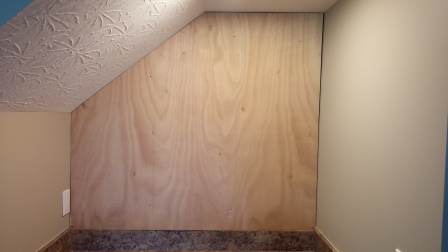 All the advance work led us to cover the plywood with cork shelf paper. This could help add depth to our design.

The actual construction was a slow process. After all, in most cases, we glued the corks individually – most of the 800+ one by one. We did most of the work on a table. After attaching the board to the wall, we completed the project. Voilà! 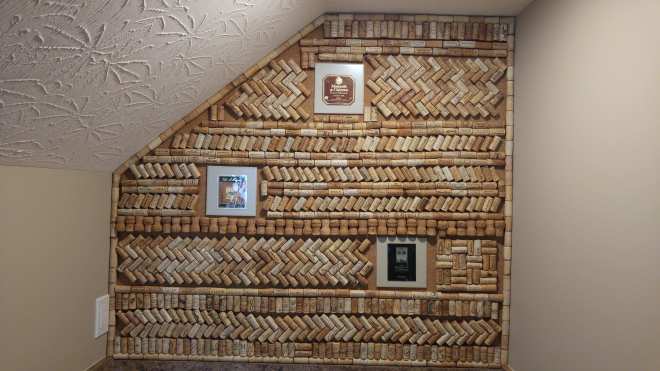 Growing up in an Italian household, I learned to drink wine at an early age through the wonders of 7Up. Although a s an adult I didn’t step up into the real wine world; well, not until 1997 – the year of our week vacation in San Francisco, which included a one-day trip to Napa.

Since I’ve already posted about my wine journey, that’s not where this story is going. Early in my journey I started saving corks. Not as a collector, but just saving them!

Corks tell stories. Most of natural, thus made from the striped bark of a cork tree; but the synthetics come in a variety of colors. Some wineries print their name horizontally, others vertically. Some have sayings, others have images. Some display humor, others are serious.

Here are ways we use corks.