First of all, they are more than simply two birds – more than two bluebirds – they are two Charley Harper bluebirds.

One on the left … 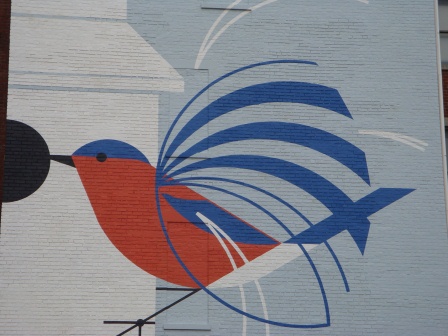 Two bluebirds – a male and a female – coming home

Known for his minimalist, geometric style commonly featuring wildlife in his work, Charley Harper (1922-2007) is a local artist who became accomplished and celebrated. I didn’t realize Harper’s impact until I saw his work in a bookstore of a Frank Lloyd Wright home.

Homecoming (Bluebirds) is an ArtWorks mural honoring Charley Harper. Simplistic in style, this work is for Harper and his wife (Edie) whose studios were in their home. A past post I did on Charley Harper is further below.

ArtWorks is a unique non-profit organization that employs and trains local youth to create art in the community. To date, ArtWorks is responsible for over 125 murals throughout Cincinnati – which many are in the main part of the city.

To see more of my posts about the murals of Cincinnati, click here.

Thanks to Resa (Toronto’s leading lady) whose posts about street art in Toronto and Winnipeg, got me interested in outdoor art in my area. I invite readers to visit Resa’s blog (but tell her I sent you.)